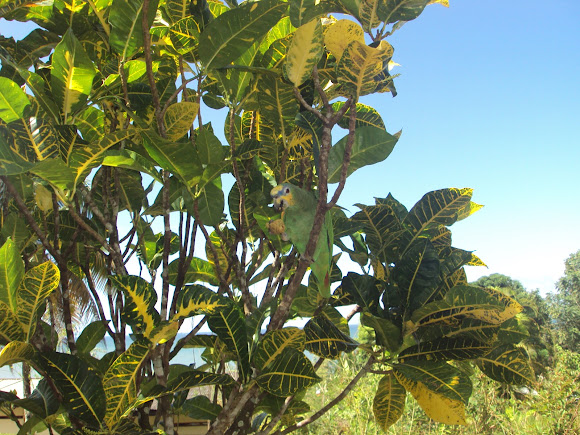 The Orange Winged Amazon is Mainly a green parrot about 13inches long and weighs about 350grams it has blue and yellow feathers on its head and orange feathers in the wings and tail which can be seen during flight.It is a noisy bird and usually eats fruits and seeds.

The Orange Winged Amazon is a resident of South America, Trinidad and Tobago, Colombia, Peru and Central Brazil. It prefers forested areas and semi-open country areas. It roosts communally in palm and other trees and can be seen in large numbers at the roosting sites at dawn and dusk.

I saw this bird on a hike I took recently, resting on a young plant whose name I can't remember(The plant that is not the bird).It was eating Phoulourie (Which is a popular delicacy here in Trinidad). I have no idea where it got the phoulourie but it seemed to be enjoying it.It was very friendly and actually allowed us to pet it before it took of.

Port of Spain, Trinidad and Tobago