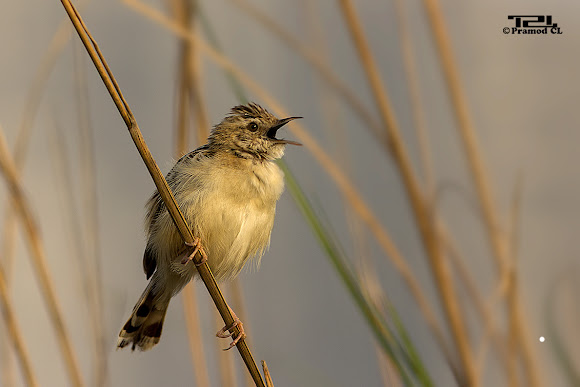 The zitting cisticola is brown above, heavily streaked with black markings. The underparts are whitish, and the tail is broad, white-tipped and flicked frequently, giving rise to the alternative name for the species. The adult males have less crown streaking and more back marking than the females, but there are no great difference between the sexes or the eighteen geographical races. The absence of a nuchal collar separate it from Cisticola exilis. In the non-breeding season, they tend to skulk within the grass and can be hard to spot.

This species is found mainly in grassland habitats, often near water. Most populations are resident, but some East Asian populations migrate south to warmer areas in winter. In the Himalayas, they ascent to about 1,900 m (6,200 ft) during summer but are below 1,300 m (4,300 ft) in the winter. This species is a rare vagrant to northern Europe, mostly as a spring overshoot. Its European range is generally expanding, although northern populations are especially susceptible to hard winters.