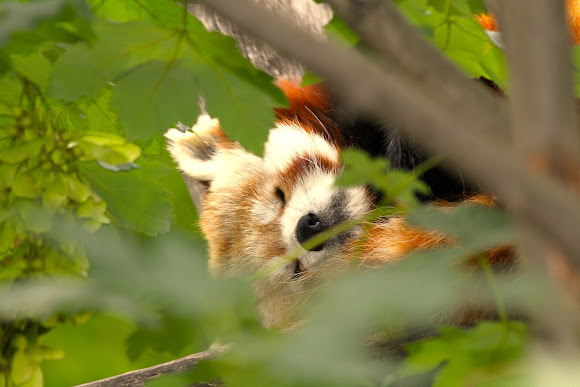 The red panda is territorial; it is solitary except during mating season. The species is generally quiet except for some twittering, tweeting, and whistling communication sounds. It has been reported to be both nocturnal and crepuscular, sleeping on tree branches or in tree hollows during the day and increasing its activity in the late afternoon and early evening hours. It sleeps stretched out on a branch with legs dangling when it is hot, and curled up with its tail over the face when it is cold.This panda is very heat sensitive, with an optimal “well-being” temperature between 17 and 25 °C (63 and 77 °F), and cannot tolerate temperatures over 25 °C (77 °F). -- Wikipedia