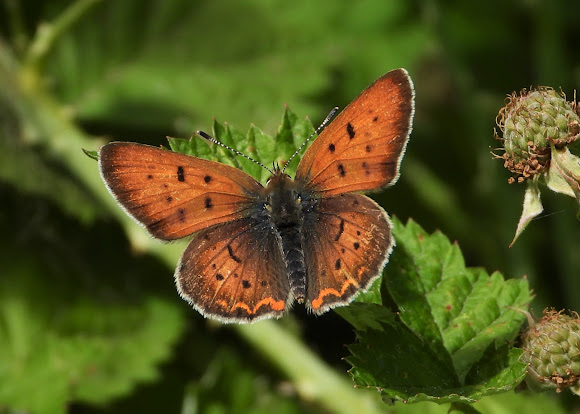 The female (pics 1 and 2) is a relatively small butterfly with a wingspan that is 30–38 mm. The upper side of the wings is light brown to orange-brown with dark markings and an orange band near the margin of the hindwings. The male (pics 3 and 4) is very similar but with less orange-brown and often with purple iridescence on the upper surface. I initially found these two in a twirling mating dance. When they finally landed I was able to get pics of both individually.

Spotted in eastern Washington in the Cascade foothills above 2000 ft. along a dirt road where there was an opening in the forest. Plenty of Thistle and other wildflowers in the area.

Adults feed on flower nectar. The larvae feed on the leaves of Polygonum, Rumex, and sometimes Potentilla species. The species overwinters as an egg.