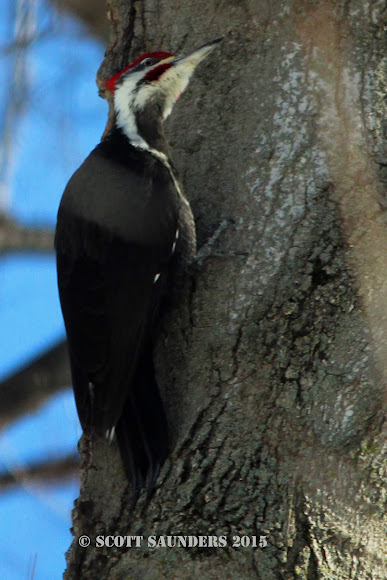 Adults are 40 to 49 cm (16 to 19 in) long, span 66 to 75 cm (26 to 30 in) across the wings and weigh 250 to 400 g (8.8 to 14.1 oz), with an average weight of 300 g (11 oz). Each wing measures 21.4 to 25.3 cm (8.4 to 10.0 in), the tail measures 14 to 17.4 cm (5.5 to 6.9 in), the bill is 4.1–6 cm (1.6–2.4 in) and the tarsus measures 3.1–3.8 cm (1.2–1.5 in).[3][4] They are mainly black with a red crest, and have a white line down the sides of the throat. They show white on the wings in flight. The flight of these birds is strong and direct but has an undulating quality, similar to the relatively unique flight-style of all woodpeckers. Adult males have a red line from the bill to the throat, in adult females these are black.[5] Two species found in the Old World, the White-bellied and black woodpeckers are closely related and occupy the same ecological niche in their respective ranges that the pileated occupies in North America.[3] The only North American birds of similar plumage and size are the ivory-billed woodpecker of the Southeastern United States and Cuba, and the related imperial woodpecker of Mexico. However, unlike the pileated, both of those species are extremely rare, if not extinct. Most reports of the ivory-billed woodpecker are believed to be erroneous reports of the far more common pileated. The call is a loud, far-carrying laugh, sometimes described as a "jungle bird" call due its wild, un-fettered quality. The northern flicker, which is very different looking and weighs about half as much as a pileated, has a similar-sounding call but has a weaker voice. Its drumming can be very loud, often sounding like someone striking a tree with a hammer.

The pileated woodpecker occupies a large range and is quite adaptable. Its ability to survive in many wooded habitat types has allowed the species to survive human habitation of North America much better than the more specialized ivory-billed woodpecker. Pileated woodpeckers have a large population size and, despite being non-migratory, are protected under the U.S. Migratory Bird Act. Due to the considerable damage that pileated woodpeckers can do to trees, some people may consider them harmful if found on their property, but the large birds control many insect populations, especially tree beetles, that may otherwise experience outbreaks.