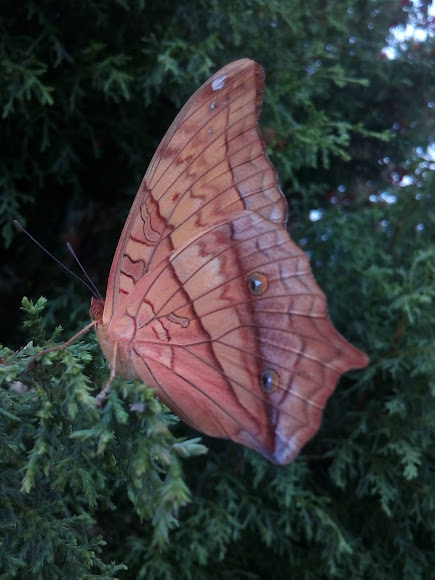 Vindula erota (the cruiser) male and female. Cruiser Butterfly There are at least thirteen known subspecies of the Indo-Australian cruiser butterfly, several of which are restricted to a single island in the Pacific Ocean. As their name indicates, cruiser butterflies are strong and lofty fliers. Male members of the species are most often observed cruising along forest roads and edge habitat, but females often soar to great heights, sometimes laying eggs as high as 1,800 meters in the tropical rainforest canopy. The cruiser butterfly is a medium-sized lepidopteran in the family Nymphalidae, which includes the emperor, admiral, tortoiseshell, and fritillary butterflies. Members of the species have a highly modified front pair of legs and possess wingspans 70 to 100 millimeters wide. The wing upper sides of female cruisers are colored a burnt orange and black. Males, however, tend to be lighter and more yellow. Cruiser butterflies are scientifically known asVindula erota, but are commonly called banded treebrown butterflies in Thailand. The name stems from the cryptic undersides of their wings, which are brown and offer camouflage in dried foliage. Cruiser larvae feed on the leaves of plants in the family Passifloraceae, which includes the passion vines and passionflowers. Their favorite seems to be the succulent Adenia, known for its poisonous sap and wine bottle-shaped swollen stems. The fleshy larvae are primarily gray, are sparsely covered with spines, and feature a prominent black horned mask. The cruiser pupa maintains the subdued coloration of the caterpillar. The chrysalis can easily pass as a leaf skeleton due to its lengthy and curiously shaped appendages that correspond to a decaying leaf's ribs or veins. Local populations of cruiser butterflies, particularly on smaller islands, are strained. Collection pressures accompanied by human encroachment, pesticide use, and habitat destruction have been a heavy burden on the butterfly species. Historic and modern wars have also taken their toll on the lepidopterans. An optimistic sign for the cruiser butterfly does exist, however. The species is often touted in ecotourism advertisements for butterfly watching safaris in India, Southeast Asia and the Malaysian Archipelago, and is featured at many educational butterfly conservatories in North America and Europe. Sources of information : (read more) https://rainforestreports.weebly.com/cru...

Found one female among 10 male... So hard to snap on female because she flies on upper tree and she don't like to sit longer in one spot.

Hi Ruth. Are the first three pictures of the male then, and the last of the female? The first shots are really nice. As you say, the higher one is harder to get. Thanks for sharing Ruth.