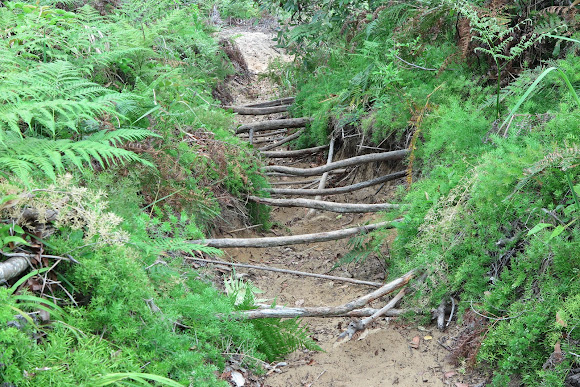 I wasn't aware of these trees until I tried to negotiate the track and tripped on their exposed roots. They're able to grow in excessively sandy soils, and that's just as well because North Stradbroke Island is the second largest sand island in the world. Trees rather stunted with gnarled branches, and bark is rough, fibrous and flaky. Leaves rather broad with prominent rib, glossy dark green, and lanceolate. Rather small buds, but unfortunately not in flower. Root system shallow but extensive, and photos 1 & 2 show the exposed roots due to erosion. PS: 27 July, 2019 - It's taken a while, but I'm certain this spotting is Lophostemon suaveolens (commonly known as "swamp box", "swamp mahogany" or "swamp turpentine"), and is one of two Lophostemon species that have been recognise as occurring on this island. The other is L. confertus, aka "brush box". There are four species of Lophostemon, a genus that belongs to the family Myrtaceae.

Found at Point Lookout on North Stradbroke Island. Exposed headland area with native vegetation, extreme winds (at times), and salty air. Sandy soil, although much moisture retained by ground cover of mostly bracken (Pteridium esculentum) and one of the asparagus weed species.

Mark, it's taken 4 years, but I think I've finally identified this spotting. Being the swamp variety of Lophostemon, it's not a naturally seeded tree. I haven't been back to this location since.

Stunning. The tricks nature plays on us.

It looked amazing. I'll do my best to get an ID. Will be back over there in May, so will have a closer look.

Wow amazing. I remember climbing over those on Straddie and just assuming someone had put poles there. This will be interesting.