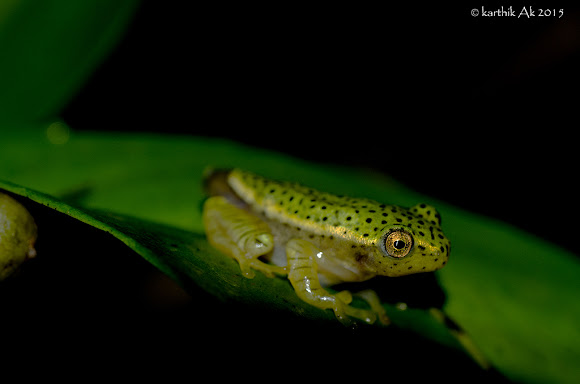 The Golden Eye! Western Ghats is truly a hidden treasure of India. There are many species large and small that are yet to be discovered or described. My only wish is to see as many as i can before the pristine forests along with its gems are engulfed in the name of development! Pictured here is one such gem found in the the mighty Ghats! A froglet stage of an endangered species of frog - Rhacophorous lateralis, that was rediscovered after more than a century or perhaps neglected for a century!! It was my dream to see the tadpole and froglet stage of these frogs, luckily i was able to find couple of them in froglet stages. I wanted to show the beautiful eyes, but couldnt get a better image than this. It was very challenging to shoot, the conditions were very bad, it was raining with strong winds, the leaf was rocking heavily, in spite of such movements, the froglet was on the leaf. Hope these gems stay here for many years to come!! http://www.indianaturewatch.net/displayi... https://www.flickr.com/photos/karthikakm...

Small shrubs close to streams or near water bodies.

Congratulations KarthikAk! Your spottings has been chosen for Project Noah Fact of the Day! "Discovered, lost, and found again! In recent years, scientists have not only uncovered previously unknown species, but also rediscovered rare species once described and then never officially seen again. Take the case of Rhacophorus lateralis, a species of tree frog originally described in 1883 by zoologist George Albert Boulenger based on a single specimen brought back from India. It was only recently collected and studied again following an expedition by the University of Aberdeen to the Western Ghats mountain range in South India. Not surprisingly, the Western Ghats are recognized as one of the planet’s biodiversity hotspots. Rhacophorus lateralis remains very rare in the wild, with its population endangered because of habitat loss.
http://threatenedtaxa.org/ZooPrintJourna...

Rhacophorous lateralis, froglet stage, spotted in Karnataka, India, by Project User KarthikAk. Make sure to read his description of his encounter!"
https://www.facebook.com/projectnoah/pho...

You're right.. a living jewel.

I really don't have words... what a lovely gem.... he become a member of my dream frogy list.... Great capture Karthik....

That is a beauty Karthik ! I do hope they do not touch the Ghats where they are continuing to find new species. Thanks for bringing this to us.

A stunning image. Thank you for sharing it.

This is absolutely beautiful KarthikAk. I look forward to many more spottings of yours from the Ghats! Thank you for sharing :)

It's truly a gem! Beautiful finding! Thanks for sharing this beauty and the experience. :):)