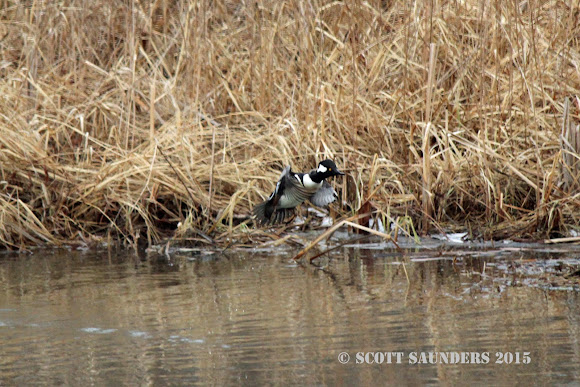 The hooded merganser is a sexually dimorphic species. The adult female has a greyish-brown body, with a narrow white patch over the lower breast and belly. She has a light reddish-brown crest extending from the back of the head. During the nonbreeding season the male looks similar to the female, except that his eyes are yellow and the female's eyes are brown. In breeding plumage the dorsal areas and the head, neck and breast of the mature male are mainly black with white markings; there are large white patches on either side of the crest, and they are particularly conspicuous when he raises his crest during courtship. His lower flanks are a rich reddish-brown or chestnut in colour, and the breast and undersides are more or less white, extending into white stripes across the crop and breast. In both genders there are narrower pencilled white stripes along the tertial wing feathers; when the bird is in repose, then if the tertial feather stripes are visible, they have the appearance of longitudinal white stripes along the bird's lower back.[2] First-winter birds differ from adult females in appearance in that they have a grey-brown neck and upper parts; the upper parts of adult females are much darker — nearly black. Furthermore, the young birds have narrower white edges to their tertial feathers than adults do. Females of all ages are dark-eyed, whereas in males the eyes become pale during their first winter.