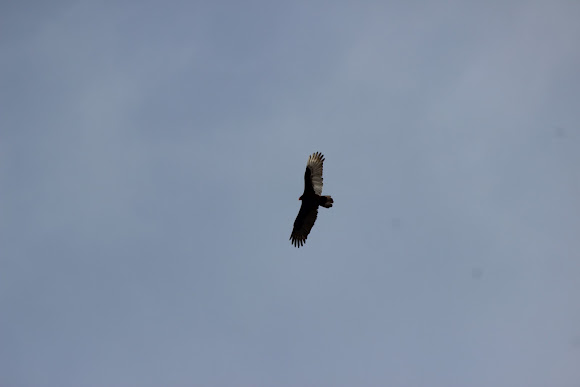 A large bird, it has a wingspan of 160–183 cm (63–72 in), a length of 62–81 cm (24–32 in), and weight of 0.8 to 2.3 kg (1.8 to 5.1 lb).[26][27][28] Birds in the northern limit of the species' range average larger in size than the vulture from the neotropics. 124 birds from Florida averaged 2 kg (4.4 lb) while 65 and 130 birds from Venezuela were found to average 1.22 and 1.45 kg (2.7 and 3.2 lb), respectively.[29][30][31] It displays minimal sexual dimorphism; sexes are identical in plumage and in coloration, although the female is slightly larger.[32] The body feathers are mostly brownish-black, but the flight feathers on the wings appear to be silvery-gray beneath, contrasting with the darker wing linings.[26] The adult's head is small in proportion to its body and is red in color with few to no feathers. It also has a relatively short, hooked, ivory-colored beak.[33] The irises of the eyes are gray-brown; legs and feet are pink-skinned, although typically stained white. The eye has a single incomplete row of eyelashes on the upper lid and two rows on the lower lid.[34] The two front toes of the foot are long and have small webs at their bases.[35] Tracks are large, between 9.5 and 14 cm (3.7 and 5.5 in) in length and 8.2 and 10.2 cm (3.2 and 4.0 in) in width, both measurements including claw marks. Toes are arranged in the classic, anisodactyl pattern.[36] The feet are flat, relatively weak, and poorly adapted to grasping; the talons are also not designed for grasping, as they are relatively blunt.[3] In flight, the tail is long and slim. The black vulture is relatively shorter-tailed and shorter-winged, which makes it appear rather smaller in flight than the turkey vulture, although the body masses of the two species are roughly the same. The nostrils are not divided by a septum, but rather are perforate; from the side one can see through the beak.[37] It undergoes a molt in late winter to early spring. It is a gradual molt, which lasts until early autumn.[6] The immature bird has a gray head with a black beak tip; the colors change to those of the adult as the bird matures.[38] Captive longevity is not well known. As of 2015 there are two captive birds over 40 years old: the Gabbert Raptor Center on the University of Minnesota campus is home to a turkey vulture named Nero with a confirmed hatch year of 1974,[39] and another female bird, named Richard, lives at the Lindsay Wildlife Museum in Walnut Creek, CA. Richard hatched in 1974 and arrived at the museum later that year.[40] The oldest wild captured banded bird was 16 years old.[4] Leucistic (sometimes mistakenly called "albino") turkey vultures are sometimes seen.[41][42] The turkey vulture, like most other vultures, has very few vocalization capabilities. Because it lacks a syrinx, it can only utter hisses and grunts.[5] It usually hisses when it feels threatened, or when fighting with other vultures over a carcass. Grunts are commonly heard from hungry young and from adults in their courtship display.