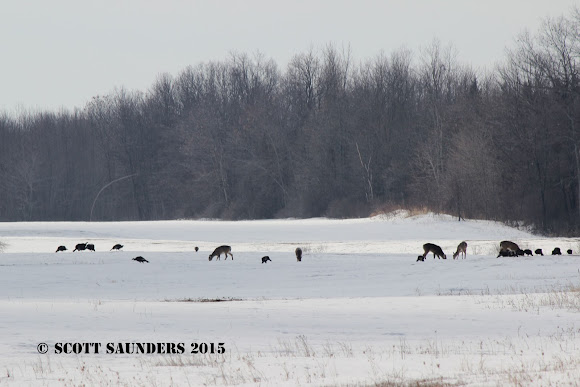 The deer's coat is a reddish-brown in the spring and summer and turns to a grey-brown throughout the fall and winter. The deer can be recognized by the characteristic white underside to its tail. It will raise its tail when it is alarmed to flag the other deer. A population of white-tailed deer in New York is entirely white (except for areas like their noses and toes)—not albino—in color. The former Seneca Army Depot in Romulus, New York, has the largest known concentration of white deer. Strong conservation efforts have allowed white deer to thrive within the confines of the depot. White-tailed deer's horizontally slit pupils allow for good night vision and color vision during the day.

Although most often thought of as forest animals depending on relatively small openings and edges, white-tailed deer can equally adapt themselves to life in more open prairie, savanna woodlands, and sage communities as in the Southwestern United States and northern Mexico. These savanna-adapted deer have relatively large antlers in proportion to their body size and large tails. Also, a noticeable difference exists in size between male and female deer of the savannas. The Texas white-tailed deer (O. v. texanus), of the prairies and oak savannas of Texas and parts of Mexico, are the largest savanna-adapted deer in the Southwest, with impressive antlers that might rival deer found in Canada and the northern United States. Populations of Arizona (O. v. couesi) and Carmen Mountains (O. v. carminis) white-tailed deer inhabit montane mixed oak and pine woodland communities.[20] The Arizona and Carmen Mountains deer are smaller, but may also have impressive antlers, considering their size.

There was lots of turkeys there too.