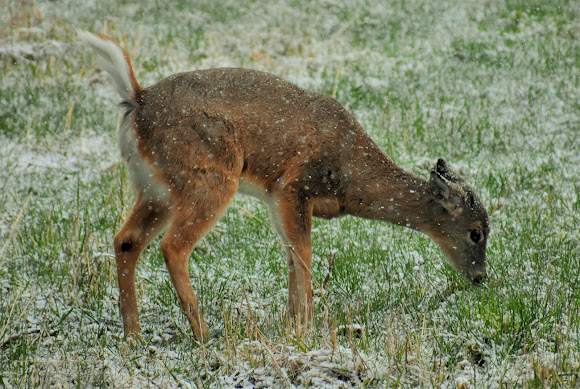 A young doe stepped out of the woods to graze while it was snowing. The Columbian white-tailed deer was federally listed as an endangered species in Washington and Oregon in 1967. Upon the creation of the Endangered Species Act, in 1978 the deer was federally recognized as being endangered. In 2003 (50) of these deer where moved here (Ridgefield National Wildlife Refuge) from the Julia Butler Hansen National Wildlife Refuge. Thanks to all the wildlife agencies involved in Washington and Oregon, the species now is numbered at around 6000.

Spotted grazing in a meadow at the Ridgefield National Wildlife Refuge. This is my first spotting of this species. I did see two others that day, but couldn't get a pic.

For those interested in this species see spotting http://www.projectnoah.org/spottings/274...