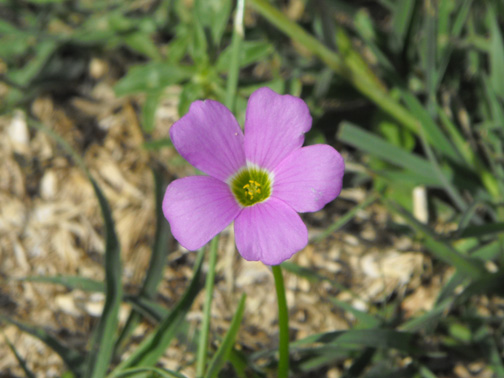 This plants leaves grow from the base of the plant, with 3 leaflets about 1 inch long, notched slightly at the center of the outer edge. The leaves are cloverlike, about 2 inches across, green above and below. They fold downward, umbrella-like, at dusk or in cloudy weather. Flowers grow in clusters on leafless stems that grow from the base of the plant. Only 1 or 2 bloom at a time. They have a shallow funnel shape, ending in 5 lavender-pink to purple petals.

The species name of this plant is named for Thomas Drummond, (ca. 1790-1835), naturalist, born in Scotland, around 1790. In 1830 he made a trip to America to collect specimens from the western and southern United States. In March, 1833, he arrived at Velasco, Texas to begin his collecting work in that area. He spent twenty-one months working the area between Galveston Island and the Edwards Plateau, especially along the Brazos, Colorado, and Guadalupe rivers. His collections were the first made in Texas that were extensively distributed among the museums and scientific institutions of the world. He collected 750 species of plants and 150 specimens of birds. Drummond had hoped to make a complete botanical survey of Texas, but he died in Havana, Cuba, in 1835, while making a collecting tour of that island.

Thank you Lisa! Apparently this one is a Texas native wildflower.

I had not luck in the Mediterranean area either.

Thank you PerilsOfPlastic. I will do that.

lovely!look under Mediterranean wild flowers and you might be surprised!