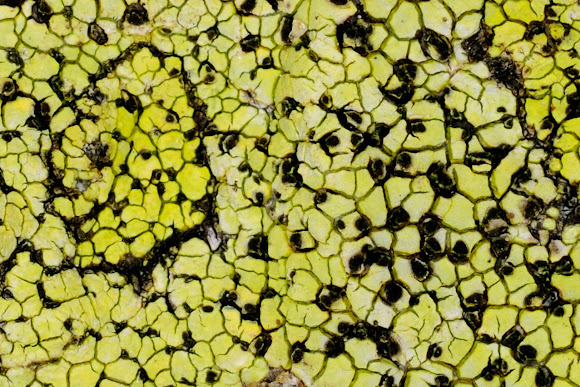 Crustaceous lichen which grows on rocks in mountainous areas of low air pollution. Each lichen is a flat patch bordered by a black line of spores. These patches grow adjacent to each other, leading to the appearance of a map or a patchwork field. Map lichen is a lichen widely used by climatologists in determining the relative age of deposits, e.g. moraine systems, thus revealing evidence of glacial advances. The process is termed lichenometry. Lichenometry is based on the assumption that the largest lichen growing on a rock is the oldest individual. If the growth rate is known, the maximum lichen size will give a minimum age for when this rock was deposited. Growth rates for different areas and species can be obtained by measuring maximum lichen sizes on substrates of known age, such as gravestones, historic or prehistoric rock buildings, or moraines of known age (e.g. those deposited during the Little Ice Age).

On a granite rock forming a wall of an old stone house.

In an experiment, this lichen species was placed in a capsule and launched into space. The capsule was opened, exposing the lichen to space conditions for 15 days before being brought back down to Earth, where it showed minimal changes or damage

Thanks to you Lars

Thanks for the hint, Angel - will keep that in mind

Just find in your neighbourhood a granite mountain sufficiently high, and go up until the trees disappear. There the rocks will be full of Map lichens. They are very sensitive to air pollution

Angel, this is such fascinating information; it really blows me away. I hope you don't mind, but I've added a link to this spotting about lichenometry.

Awesome, Angel! I am still looking for one to find.