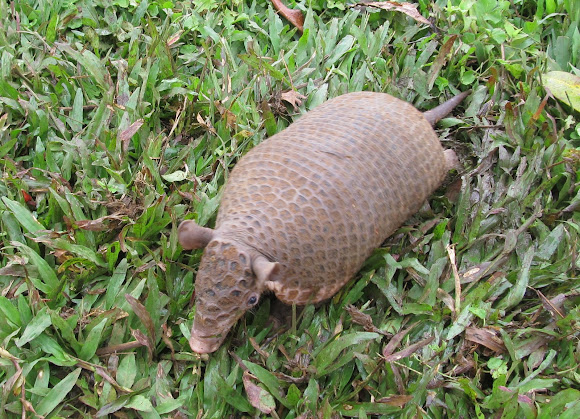 These are smaller armadillos measuring 35-45 cm with a 15+ cm tail. The females are slightly larger. The upper parts are covered with bony armor and is dark gray. The carapace consists of 10-13 rows of movable smallish square scutes so it is more agile that other armadillos. The head is broad and the snout is blunt. They have relatively large ears that can fold back to cover the meatus (ear opening). The tail is long and slender and without significant armor. The feet each have five claws, the central claw being greatly enlarged.

They are found in Northern South America east of the Andes from Northern Colombiai to Northern Paraguay and Southern Brazol. These individuals were found underground among the roots of a huge tree in the Amazon rainforest of SE Ecuador.

This female and her little one were found while removing a huge tree that was starting to be dangerous, coming down in large pieces. They had burrowed underneath the trunk among the roots.

Haha What a brilliant spotting. Such amazing animals. Thanks for sharing, Tukup.