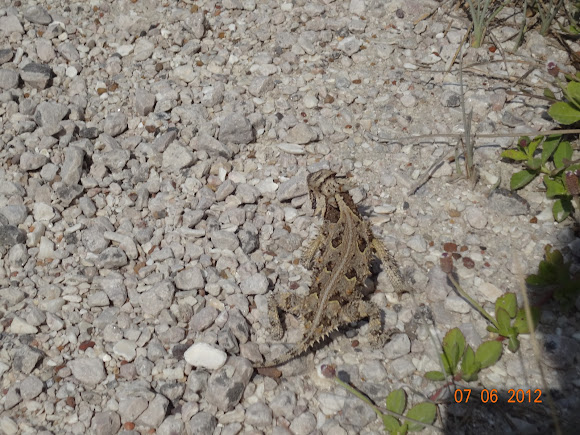 Texas horned lizards are pretty easy to ID. They dont call them horny toads for nothing. They've got many small thorn-like projections on their backs, and some more prominent horns on their heads. They tend to have some different coloration based on the habitat they're found in, so some will be darker or more brownish, and others are more gray like this one. When afraid, they will inhale air and flatten out their body to make themselves look more threatening. I've heard that they respond to different predators using different behaviors: they flatten out on the ground for avian predators, but will tilt their thorny backs towards snakes. They also are known to squirt blood from their eyes, but I've never provoked them into doing this (I think that's rude on my part, besides being stressful and causing them to lose valuable moisture in a dry habitat). Texas horned lizards are a state-threatened species in TX. Their populations are declining throughout their distribution, for a number of reasons. In this area they are hardly ever spotted on the mainland, but they do have a healthy population on Matagorda Island.

They're pretty cool little guys. To ID males: they have femoral pores along the inner thigh.