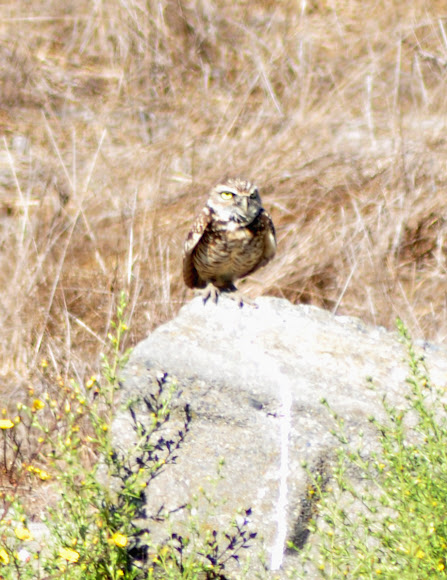 Burrowing Owls have bright yellow eyes; their beaks can be dark yellow or gray depending on the subspecies. They lack ear tufts and have a flattened facial disc. The owls have prominent white eyebrows and a white "chin" patch which they expand and display during certain behaviors, such as a bobbing of the head when agitated. Adults have brown heads and wings with white spotting. The chest and abdomen are white with variable brown spotting or barring, also depending on the subspecies. Juvenile owls are similar in appearance, but they lack most of the white spotting above and brown barring below. The juveniles have a buff bar across the upper wing and their breast may be buff-colored rather than white. Burrowing Owls of all ages have grayish legs longer than other owls. Males and females are similar in size and appearance, and display little sexual dimorphism. Females tend to be heavier, but males tend to have longer linear measurements (wing length, tail length, etc.). Adult males appear lighter in color than females because they spend more time outside the burrow during daylight, and their feathers become "sun-bleached". The burrowing owl measures 19–28 cm (7.5–11 in) long, spans 50.8–61 cm (20.0–24 in) across the wings and weighs 140–240 g (4.9–8.5 oz).

The Burrowing Owls are Endangered in California. It took me 2 months of continuous searching to finally get a chance to see one. Although fantastic to finally see, i plan to go back to get much better pictures!

Nice spotting - hope to see one one day