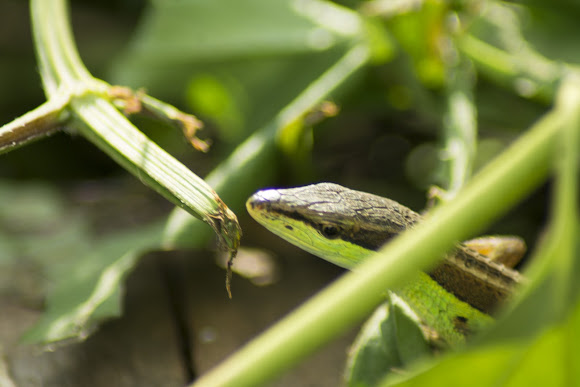 The Long Tailed grass lizard is easily identifiable by a long tail, and has a white to cream coloured underbelly with a brown, green or beige back, often adorned with brown stripes of different shades. It typically has a small head with a sharply pointed snout and black or pink tongue. Its body is slightly elongated and thin with small pointy scales beneath the chin resembling a beard. Males have white spots on their sides, while females do not.[3] Males have tails that thicken past the vent and are generally thicker than the female's down the entire length of the tail. The light stripes on the length of the body are yellower than the female's, which are more cream colored.They grow up to 12 inches (30 cm.) long, with the tail usually being three times their body length

The Takydromus sexlineatus is found throughout South East Asia, and is native to a number of countries including India, China, Thailand, and Indonesia. The subspecies ocellatus is found in areas such as southern China, north Burma and north Malaysia