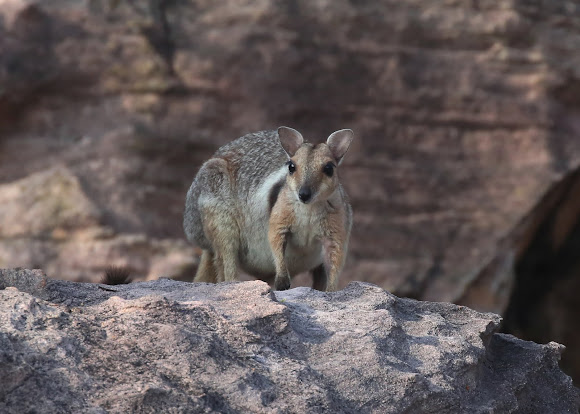 Also known as the Eastern Short-eared Rock Wallaby. This is a medium sized wallaby at about 75-100cmlong and weighing in around the 2.6 to 3.5kg range. Mainly a med to dark grey body with reddish limbs, tail and face. The diagnostic black crescent behind the shoulder with a white border behind that. It also has a line of black running from its snout over the head and nape finishing between the shoulders. The tail is long with a bushy tip.

Found in sandstone country in Kakadu National Park near Ubirr. This species is quite restricted in range. Once thought to be a sub species of the Short-eared Rock Wallaby (Petrogale brachyotis), it has now been designated as a species in its own right.

Toward the end of 2014 it was confirmed through genetic analysis that this was a stand alone species. It is both smaller and generally more clearly marked to look at. Named after Captain Sir G H Wilkins who first collected this species in 1925. It took nearly 100 years to actually identify it as a separate species. The point being that although we take a lot for granted there are more species out there to be discovered and perhaps lost without even realizing it. Ref: Australian Museum.

Thank you Daniele, I am most honoured and thank you guys for your great comments.

Congratulations, Rob. That's a great achievement, so I'm very happy for you and this little fellow :)

Thank you Neil for your comment. It was amazing watching these guys moving up the rock faces, thier ability to move vertically was incredible for a skippy!

I missed this one completely. What an amazing animal, and one I've never seen before. Facial features are unusual for a wallaby species - quite a remarkable spotting, Rob. Belated congrats on your SOTW.

Thank you for the comments Christine and Jim. Much appreciated.

Another great spotting, Rob, well done! A little late with this one, I am getting caught up.

Thanks Rach. Yes I consider myself incredibly lucky to have seen the things I have.

Congratulations on your SOTW - another excellent set of photos. You certainly see some amazing creatures on your travels!

Great series Robert,very nice notes ,congrats on the well deserved SOTW and thanks for sharing

Thank you Antonio and Mark for your comments. I can see what you mean Mark, it has that sort of face.

Thank you so much PN rangers for the honour of this SOTW. It has made my day!

Congrats Rob. Fabulous beastie and spotting. Looks a little like a large bandicoot.

Congratulations Robert, this gorgeous rock wallaby is our Spotting of the Week! Gorgeous photos, great notes and a recently designated full species got the appreciation of the rangers' team. My own favorite comment was from Mark Ridgway: "I just can't resist a small Petrogale" ;-)

"Our Spotting of the Week takes us Down Under! For a long time this rock wallaby was considered a subspecies of the short-eared rock-wallaby (Petrogale brachyotis) found in the Kimberley (Western Australia). In 2014, through thorough genetic and morphological studies, Wilkins' rock-wallaby (Petrogale wilkinsi) was shown to be a distinct species. It is found in the northernmost parts of the Northern Territory. Rock-wallabies (genus Petrogale) are small to medium-sized macropods found in rocky habitats of Australia.
For more information: https://buff.ly/2yay2cS "

Thank you Mark and Leuba for your comments. I have always loved the rock wallaby clan and this one is just the most beautiful little creature.

Like many little marsupials put together. As always thanks for sharing this cutie.

Thank you for the nomination Daniele and thank you also Maria for your great comment.

Your spotting has been nominated for the Spotting of the Week. The winner will be chosen by the Project Noah Rangers based on a combination of factors including: uniqueness of the shot, status of the organism (for example, rare or endangered), quality of the information provided in the habitat and description sections. There is a subjective element, of course; the spotting with the highest number of Ranger votes is chosen. Congratulations on being nominated Robert!

Thank you for the comment Rach. Yes it is amazing that an unknown niche mammal species can exsist in this day and age under our noses! Gotta love DNA profiling.

Great series of photos and a very interesting looking creature. It is exciting that new species are still being discovered and appreciated in their own right.