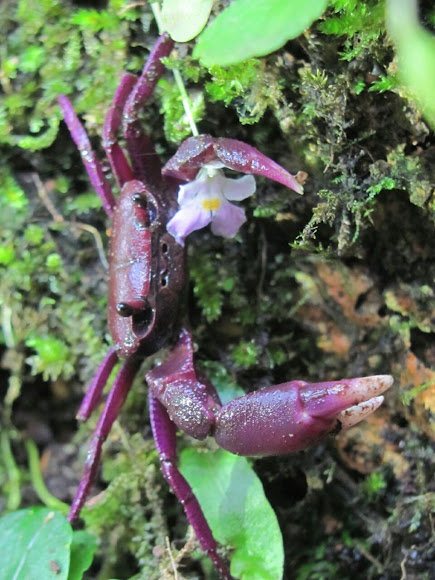 A NEW SPECIES OF CRABS “ PUPLE TREE CRAB” DISCOVERED IN “Sharavati Valley – Taluk: Sagar District : Shimoga WESTERN GHATS OF KARNATAKA. Its my immense pleasure to share that the Purple tree crabs habitats in Western Ghats of Karnataka. The Purple tree first spotted by Arjun Kamdar and team. This is a tree-living crab with a preference for the jamun tree, whose fruit colour it resembles. It was found in July 2015 from rainwater-containing tree holes in Amboli, Maharashtra. Mature and immature adults were also sighted at ground-level tree holes in Hathipal, Goa, where younger crabs were seen foraging in the undergrowth or resting under rocks. G. atropurpurea gets its name from the Latin for ‘dark purple’ (atropurpureus). This crab has a broad, deep purple shell that distinguishes it from the other newfound species. Before its scientific discovery, the crab was known to the locals as the ‘purple tree crab’; they had also observed it scavenging on millipedes and snakes that were accidentally killed by vehicles on roads. Its claw-bearing legs or pincers are differently sized – one is larger than the other. Fingers of the larger claw have four or five large teeth, leaving a gap when their tips meet. This gap in the pincers helps in gripping food and competing for mates. (However, researchers don’t think there is a single reason why they are larger in some species and smaller in others, or differently sized between males and females. This could be due to foraging, sexual selection and defense). The Jamun fruit trees population to be increased to conserve these stunning species . Complete classification of the specimen; Kingdom : Animalia Phylum : Arthropoda Subphylum : Crustacea Class : Malacostraca Order : Decapoda Infraorder : Brachyura Superfamily : Grapsoidea Family: Gecarcinidae Genus : Ghatiana Species : Atropurpurea Scientific Identification: Ghatiana atropurpurea

Its a tree specie crab habitat on Syzygium cumini, known as jambul, jambolan, jamblang or jamun, is an evergreen tropical tree in the flowering plant family Myrtaceae in Western Ghats of India. Syzygium cumini is native to the Indian Subcontinent and adjoining regions of Southeast Asia.