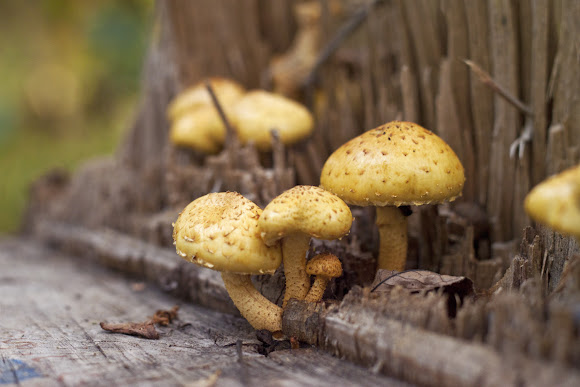 2 to 10 centimeters wide convex to broadly convex to nearly plane, whitish to yellowish, covered in tan to orange-ish brown scales. Pholiota squarrosoides is slimy when wet, and its gills do not go through a greenish period as does P. squarrosa.

Saprobic and possibly parasitic; growing in clusters (rarely alone or scattered) on the wood of hardwoods; summer and fall; fairly widely distributed in North America.

Regarded as unsuitable for human consumption, but is said to have the finest flavor of all Pholiotas. Eating them is not recommended because they are look nearly identical to P. squarrosa, which is now considered to be poisonous and may induce gastrointestinal reactions, especially if consumed in combination with alcohol.

Thanks for the ID, JohnE.Ringo! I just spent an hour reading about Pholiota, and I have updated the spotting accordingly.