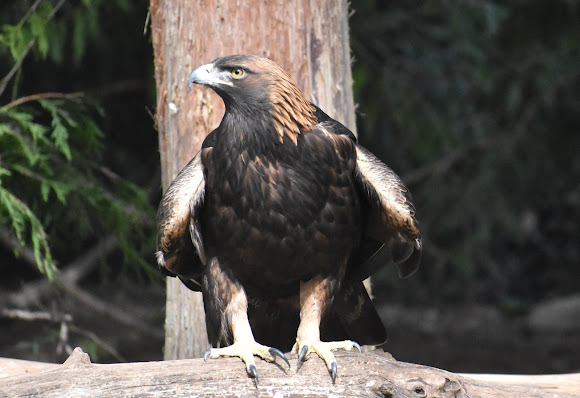 A large raptor in which both sexes have similar plumage and are primarily dark brown, with some grey on the inner wing and tail, and a paler, typically golden colour on the back of the crown and nape that gives the species its common name. They have very strong feet and talons (pic 5).

This is an eagle that was rescued and is being rehabilitated at the Northwest Trek Wildlife Park. I'm not sure how it acquired its injury, but in pics 3 and 4 you can see its right wing is injured. Golden eagles are fairly adaptable in habitat but often reside in areas with a few shared ecological characteristics. They are best suited to hunting in open or semi-open areas and search them out year-around. Native vegetation seems to be attractive to them and they typically avoid developed areas of any type from urban to agricultural as well as heavily forested regions. In desolate areas (e.g., the southern Yukon), they can occur regularly at roadkills and garbage dumps. The largest numbers of golden eagles are found in mountainous regions today, with many eagles doing a majority of their hunting and nesting on rock formations. Found in the majority of Alaska, western Canada and the Western United States. The species is found breeding occasionally in all Canadian provinces but for Nova Scotia. It is currently absent in the Eastern United States as breeding species east of a line from North Dakota down through westernmost Nebraska and Oklahoma to West Texas. The southern limits of its range are in central Mexico

Golden eagles usually hunt during daylight hours, but were recorded hunting from one hour before sunrise to one hour after sunset during the breeding season in southwestern Idaho. The hunting success rate of golden eagles was calculated in Idaho, showing that, out of 115 hunting attempts, 20% were successful in procuring prey. A fully-grown golden eagle requires about 230 to 250 g (8.1 to 8.8 oz) of food per day but in the life of most eagles there are cycles of feast and famine, and eagles have been known to go without food for up to a week and then gorge on up to 900 g (2.0 lb) at one sitting.