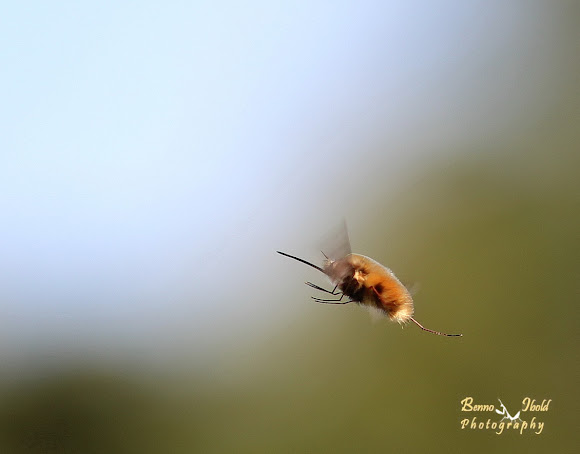 Although the morphology of beeflies varies in detail, adults of most bee flies are characterized by some morphological details that make recognition easy. The dimensions of the body vary, depending on the species, from 1.0 mm to 2.5 cm. The form is often compact and the integument is covered with dense and abundant hair. The livery is usually inconspicuous and colours such as brown, blackish- grey, and light colors like white or yellow predominate. Many species are mimics of Hymenoptera Apoidea. The head is round, with a convex face, often holoptic in males. The antennae are of the type aristate composed of three to six segments, with the third segment larger than the others; the stylus is absent (antenna of three segments) or is composed of one to three flagellomeres (antenna of four to six segments). The mouthparts are modified for sucking and adapted for feeding on flowers. The length varies considerably: for example, the Anthracinae have short mouthparts, with the labium terminating in a large fleshy labellum, in Bombyliinae; in Phthiriinae, the tube is considerably longer, and in Bombyliinae more than four times the length of the head. The legs are long and thin and the front legs are sometimes smaller and more slender than the middle and rear legs. Typically, they are provided with bristles at the apex of the tibiae, without empodia and, sometimes, also without pulvilli . The wings are transparent, often hyaline or evenly colored or with bands. The alula are well developed and in the rest position the wings are kept open and horizontal in a V shape revealing the sides of the abdomen.

Adults favour sunny conditions and dry, often sandy or rocky areas. They have powerful wings and are found typically in flight over flowers or resting on the bare ground exposed to the sun (watch video) They significantly contribute to cross pollination of plants, becoming the main pollinators of some plant species of desert environments. Unlike the majority of glyciphagous dipterans, the bee flies feed on pollen (from which they meet their protein requirements). A similar trophic behavior occurs among the hoverflies, another important family of Diptera pollinators. They are often recognizable by their stocky shapes, by their hovering behavior, and for the particular length of their mouthparts as they lean forward into flowers. Unlike hoverflies, which settle on the flower as do bees and other pollinating insects, the bee flies behave like Sphingidae and generally feed hovering in the air and using their front legs to stabilize their position.