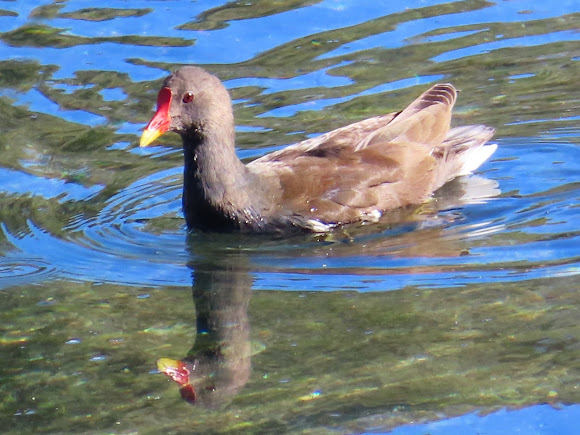 The coloration of this medium-sized ralid, at a distance, appears uniformly dark, almost black. But seen up close, you can see how the back takes on a greenish to olive hue, with abundant metallic sheen, while the head is an intense slate color, which turns bluish as it reaches the nape of the neck. The lower regions of the bird are dark gray, although the flanks are practically black and are edged by long white feathers that define a striking broken line. The bare areas of the Redfish are also certainly striking and undergo some modifications during the breeding stage, when they become brighter. Thus, the iris — normally brownish — acquires an intense crimson color; the legs take on a yellowish coloration, which turns red in the upper half of the tibia, and the frontal gusset, like the bill, acquires an intense red hue in sharp contrast to the yellow tip of the latter. The young redfish, unlike the adults, wear a fairly modest livery, dominated by brownish tones with greenish hues; Furthermore, they lack a frontal gusset and the remaining chromatic ornaments typical of mature birds.

Section that is conserved with water from the old Turia river that has currently been diverted through another basin to prevent the river from overflowing in the city. It lives in wetlands, it is frequently found near bulrush, never far from water. It is often seen swimming, gathering food on the surface of the water, or walking along the edge of aquatic vegetation.

It is practically impossible to find a humid area, no matter how small or degraded it may seem, that does not have the presence of the most abundant and widespread ralid in Europe and, perhaps, the entire planet: the adaptable and ubiquitous redfish. The key to the success of this species lies - in addition to its fertility - in its enormous capacity to adapt to any environment, as well as in its flexible diet, which includes foods from the most varied origins, from aquatic plants to carrion.