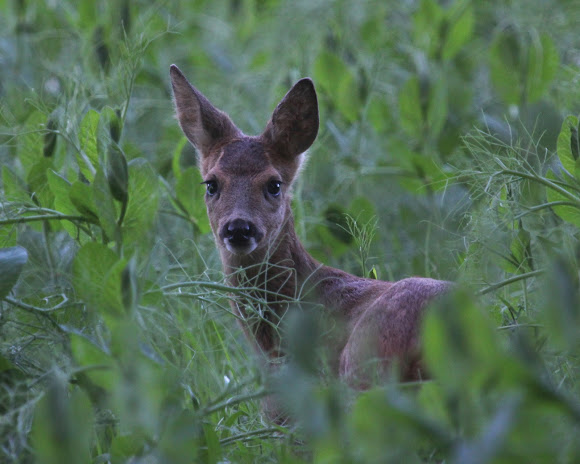 A small deer, mature male European Roe Deer stand about 70cm (25-29'') at the shoulder and weigh in at around 20+kgs. Bright foxy red in summer and a dark grey/brown in winter with a distinct white rump patch. No discernible tail but females show a tuft of fur below the vulva. The smallest of the three sub species of roe deer and has several races.

Typically a woodland species. Mixed woodland and more open farmland and moorland that has easy access to woodland across most of Western Europe. Native to the UK, the roe deer in England were thought to have died out in the 1700's. Reintroduced from Europe in 1800, this species has since thrived and is found in most of the southern counties of England and Norfolk.

Although they breed in August, due to delayed implantation of the fetus, young are not born until the following May/June and usually have twins. These images show a very young fawn and its mother from West Sussex, England. The third image is of a buck from the New Forest in Hampshire, England. Scottish roe deer are thought to be an indigenous race that has been present continuously since prehistoric times.