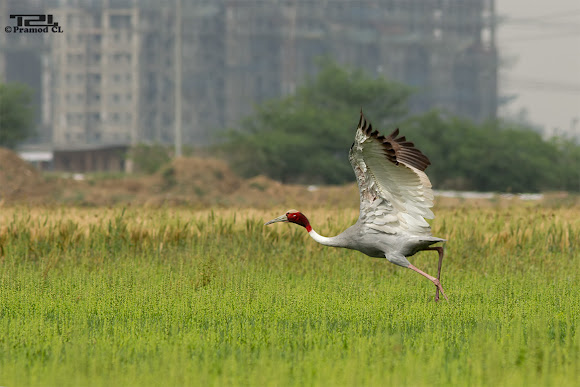 The sarus crane (Grus antigone) is a large non-migratory crane found in parts of the Indian Subcontinent, Southeast Asia and Australia. The tallest of the flying birds, standing at a height of up to 1.8 m (5 ft 11 in),[3] they are conspicuous and iconic[4] species of open wetlands. The sarus crane is easily distinguished from other cranes in the region by the overall grey colour and the contrasting red head and upper neck. They forage on marshes and shallow wetlands for roots, tubers, insects, crustaceans and small vertebrate prey. Like other cranes, they form long-lasting pair-bonds and maintain territories within which they perform territorial and courtship displays that include loud trumpeting, leaps and dance-like movements. In India they are considered symbols of marital fidelity, believed to mate for life and pine the loss of their mates even to the point of starving to death. The main breeding season is during the rainy season, when the pair builds an enormous nest "island", a circular platform of reeds and grasses nearly two metres in diameter and high enough to stay above the shallow water surrounding it. Sarus crane numbers have declined greatly in the last century and it has been estimated that the current population is a tenth or less (perhaps 2.5%) of the numbers that existed in the 1850s. The stronghold of the species is India, where it is traditionally revered and lives in agricultural lands in close proximity to humans. Elsewhere, the species has been extirpated in many parts of its former range.

The species has historically been widely distributed on the lowlands of India along the Gangetic plains, extending south to the Godavari River, west to coastal Gujarat, the Tharparkar District of Pakistan,[10] and east to West Bengal and Assam. The species no longer breeds in the Punjab, though it winters regularly.[11] Sarus cranes are rare and occur in very low numbers in West Bengal and Assam,[12] and are no longer found in the state of Bihar. In Nepal, its distribution is restricted to the western lowland plains, with most of the population occurring in Rupandehi, Kapilvastu, and Nawalparasi districts.