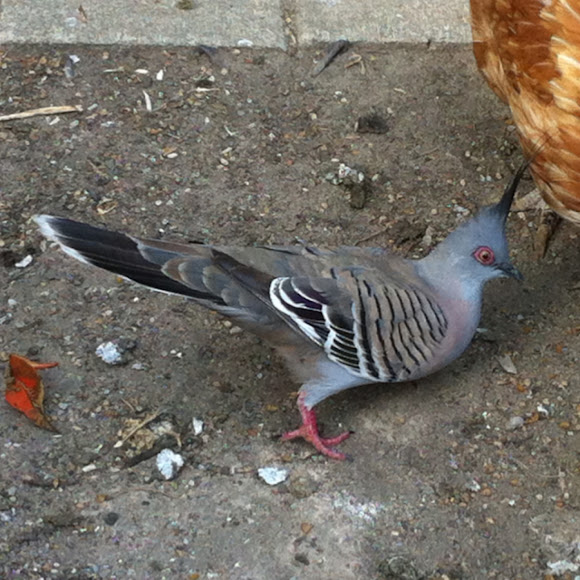 The length of the Crested Pigeon varies from 30 to 34 centimetres (12 to 13.6 inches). Colouration is grey with tinges of brown and green. It has a feathered but slender, black spike on top of the head. They run with the crest erect. The periorbital skin is bright orange. Wings have black stripes and are bronzed, while the primary feathers have colourful areas of brown, purple, blue and green. Immature birds have duller colours with no bronzing on the wings. The call is a "whoop" voiced repeatedly but singly when alarmed.

Habitat is grasslands, brush and wooded areas but they can also be seen at watercourses, homestead gardens, pastoral areas, sports grounds, and golf courses. Their habitat has expanded since settlement has produced pastoral lands (previously they were only found in inland and Western Australia). Foraging for grain, has adapted to grain farming areas, often feeding on the noxious weed of Salvation Jane.

They are commonly misidentified as the Topknot.