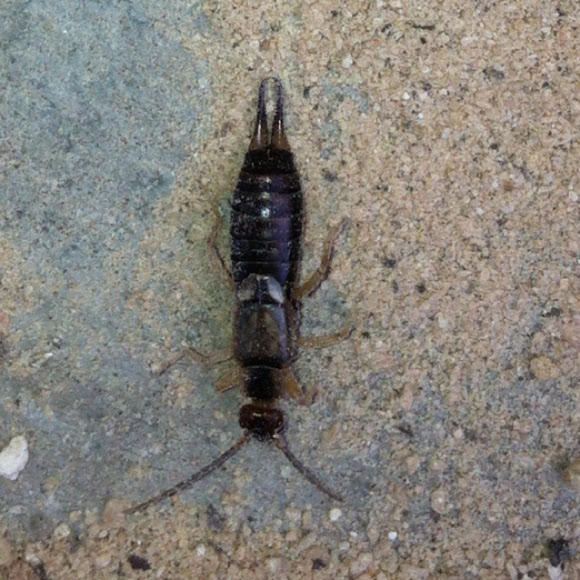 Forficula auricularia has an elongated flattened brownish coloured body, with a shield-shaped pronotum, two pairs of wings and a pair of forcep-like cerci. They are about 12–15 mm long. The second tarsal segment is lobed, extending distally below the third tarsal segment. The antenna consists of 11–14 segments, and the mouth parts are of the chewing type. Adult males are polymorphic in body weight and head width, as well as cercus length and width. The male forceps are very robust and broadened basally with crenulate teeth. The female forceps are about 3 mm long, and are less robust and straighter. The cerci are used during mating, feeding, and self-defense. Females also have tegmina of about 2 mm in length. Third instar or older nymphs that have lost one branch of cerci are capable of regenerating it in form of a straight structure. Males with asymmetrical forceps are called gynandromorphs or hermaphrodites because they resemble females.

European earwigs survive well in cool, moist habitats and have an optimum mean growth temperature of 24 °C (75 °F). Their daily abundance in a given year has been linked to factors such as temperature, wind velocity and the prevalence of easterly winds. The development of European earwigs also depends on temperature. Thus, the occurrence of European earwigs can be predicted based on weather parameters. Hibernating adults can tolerate cool temperatures, but their survival is reduced in poorly drained soils such as clay. To avoid excessive moisture, they seek the southern side of well drained slopes. Sometimes they also occupy the hollow stems of flowers where the soil is poorly drained. Their eggs are capable of resisting damage from cold and heat.

The name "earwig" comes from the rumor that these insects crawl into human ears and enter the brain, but this is false. However, there have been cases of earwigs wandering into ears by mistake. I believe this to be a female specimen.