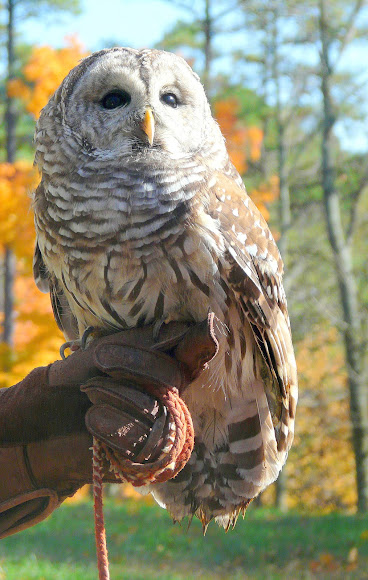 this is captive owl....but once was a wild owl that was rescued from near death.

Breeding habitats are dense woods across Canada, the eastern United States, and south to Mexico; in recent years it has spread to the northwestern United States, having gradually spread further south in the west. The species is particularly numerous in a variety of wooded habitats in the southeastern United States. Recent studies show suburban neighborhoods can be ideal habitat for barred owls. Using transmitters, scientists found that populations increased faster in the suburban settings than in old growth forest. A factor of this suburban success may be easily accessible rodent prey in such settings. However, for breeding and roosting needs, this species needs at least some large trees and can be locally absent in some urban areas for this reason. The main danger to owls in suburban settings is from cars. The increased offspring offset the death rate due to impacts from cars and disease.

The Barred Owl (Strix varia) is a large typical owl native to North America. It goes by many other names, including Eight Hooter, Rain Owl, Wood Owl, and Striped Owl, but is probably best known as the Hoot Owl based on its call.

yes ..this is captive owl....but once was a wild owl that was rescued from near death.

Is this a captive owl? You need to list it on your page please.