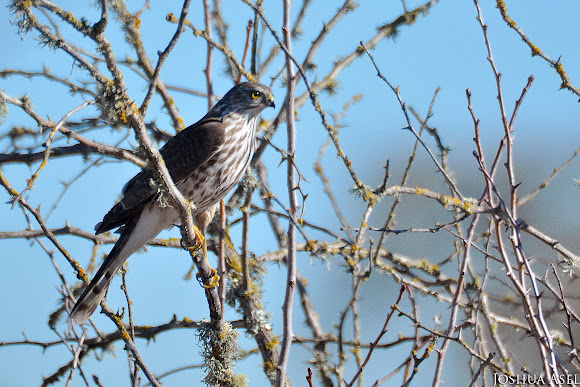 A tiny hawk that appears in a blur of motion—and often disappears in a flurry of feathers. That’s the Sharp-shinned Hawk, the smallest hawk in North America and a daring, acrobatic flier. These raptors have distinctive proportions: long legs, short wings, and very long tails, which they use for navigating their deep-woods homes at top speed in pursuit of songbirds and mice. They’re easiest to spot in fall on their southward migration, or occasionally at winter feeders.

As I was walking along a trail, many feeder birds appeared in front of me, which I then kicked up a bit, chattering as I passed by. Then, out of nowhere, this juvenile Sharp-shinned hawk jetted past my left side not more than five feet away from me in an attempt to grab a bird. He missed but then perched right in from of me, looked at me for a while, then flew away. While I have seen many hunting attempts on feeder birds, I still have yet to see a successful one! I think it's a large female because of its enormous size for a sharp-shinned.

Thank you Beaker98! Yeah they really are.

Thank you Kathleen! They are, aren't they. Whenever I'm walking through my orchard and I hear of a chain reaction of birds chirping their brains out, I know there's one of these or a Cooper's swooping through for a meal :)

Nice series Joshua! I have these visit my garden from time to time, depending on how many small birds are there! Great, fast hunters.