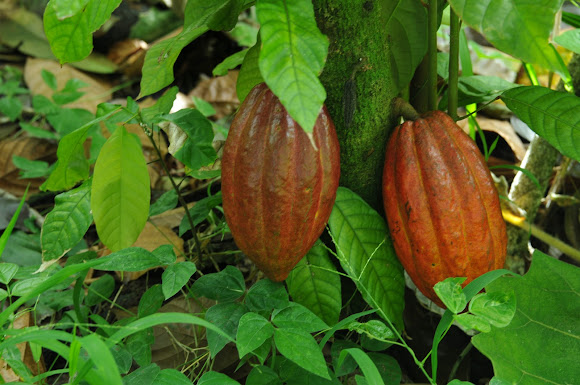 Large ribbed, elongate fruits from a tree with lanceolate leaves. The fruits turn from green to orange and eventually blacken.

Tropical rainforest orchard in the Puna region, in fairly deep soil though in the lava region.

Theobroma was "food of the gods" to the South American Indians. Cacao plants were first brought to Hawaii in 1850, but their cultivation has not been widespread there, though it is growing. They are not an invasive species there, and do not require chemicals to grow. The farmer of these trees is an experienced organic gardener from the temperate rainforest of Oregon who decided to try growing cacao trees after moving to the rainy side of the Big Island. He says it takes several varieties to make a deep flavor of chocolate.

Wow, I had no idea. You mean that whole, ribbed husk, or what's inside it? I didn't look inside of one.

Yummmmmy! The fresh seed pods are delicious too!