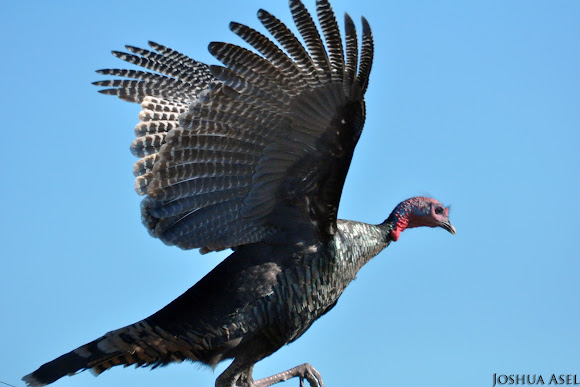 The Wild Turkey’s popularity at the table led to a drastic decline in numbers, but they have recovered and now occur in every state except Alaska.

I would like to tell you the story of this situation because it is an area of conservation that peaks a lot of my interest! And that is the problem of declining wildlife corridors. I was sitting and waiting for diurnal owls and this troop of turkeys, unknown about my location, came towards me then crossed my path. As I watched them pass to my left with surprisingly great intention, they came to a barbed-wire fence. Most of the troop, at least five, made it over. But three were clearly confused as to what to do with themselves as the rest waited patiently. After watching them for five minutes running back and fourth along the fence, I decided to intervene this human problem-created situation. So I corralled them up against the fence towards the rest of their family and easily scared them over. As humans expand out, needless to say, we take away from wildlife. One of the ways we do this is by blocking off necessary wildlife corridors that have been used for migration for hundreds to thousands of years. For some reason, the blockages created by not just fences, but also by roads, deforestation, and even windmills, stumps animals outright. Even though deer can just amazingly far and high, they won't jump over a five foot fence. Confining animals to one area can lead to situations like inbreeding and bad hunting and grazing. It is one of my dreams to have wildlife corridors reestablished throughout California in order to maintain healthier ecosystems.