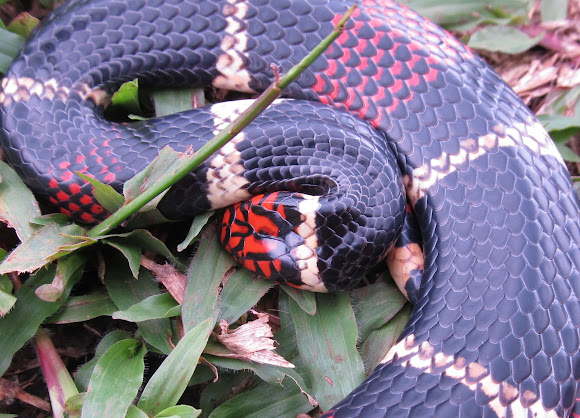 Also called the Amazon Water Snake/Coral, this is a fairly typically colored Coral snake featuring the triad of colors common in many Coral snakes (red, black, white, black, white, black, red). Nearly the entire head is red with only a small black band and white band on the rear of the head. This distinguishes it from all other Coral snakes in the area as well as false Corals. They are one of the heaviest bodied Coral snakes and, along with Micrurus obscurus are the longest, reaching lengths of 1.25 m. See notes for defensive characteristics.

This individual was seen on a trail running alongside a small river in the Amazon rainforest of SE Ecuador (700 masl).

Like most Coral snakes, when threatened it tucks it head in tight against its body (photo #1) and, forming the tip of its tail into a hook (photo #2), waves it around, flashing the bright colors of the underside of its tail. This species also flattens itself (photo #3) to make it appear wider/bigger. It is the only Coral snake that does this. They are not aggressive and will only bite if provoked. NOTE: The colors show that the rhyme “Red on yellow, kill a fellow. Red on black venom lack” does not work outside the United States. Of the six Coral snake in our area, one lacks rings, one is more speckled and the other four all have “red on black,” but they are venomous.

Well. We've been without internet/email for 2 1/2 weeks so am just this minute seeing this. Thanks for the kind words Leuba, Neil and Sukanya, and thanks for the nomination Mark. I appreciate it.

Tukup, the snake photos you post are fantastic! Congratulations for the nomination.

That's really good to know Tukup. Your comment made me smile. I don't know many sci-fi characters but D. Maul struck me as dramatic and has stayed with me. 😊

I had to Google Darth Maul. Been in the jungle too long 😊 You are right. The looks are similar, but fortunately, that doesn't carry over to personality. These snakes are non-aggressive and would never dream of ruling the Galaxy 😊 Thanks Leuba.

The head reminds me of Darth Maul. Thanks for the notes Tukup.