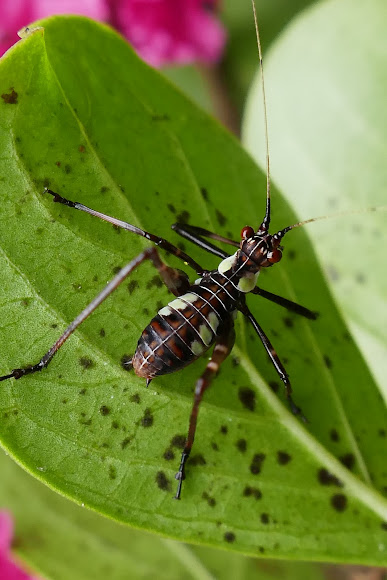 Ephippitytha trigintiduoguttata, commonly known as 32-spotted katydid, mottled katydid, and speckled grasshopper, is a native Australian insect that belongs to the family Tettigoniidae, subfamily Phaneropterinae. Insects in this family are commonly called katydids, or bush crickets. This specimen was a nymph, early instar approx. 8-10mm in length, and despite being so small, was also a very proficient jumper. Adults would usually grow to a length of 65mm, and coloured green with brown spots around the edges of each forewing. This gives the appearance of a chewed eucalyptus leaf. My first encounter with this species. Also my first spotting for 2021.

Suburban backyard in Brisbane, Queensland. This specimen was spotted on the leaves of a flowering crepe myrtle, although the species would usually be found feeding on the leaves of native eucalypts.

I have read elsewhere that Ephippitytha trigintiduoguttata is supposedly able to mimic the calls of several species of female cicadas, thus luring the males of these species to an untimely demise. Katydids are opportunistic feeders, and even herbivorous species are known to be carnivorous. While it's true that some species of native katydids are able to mimic cicadas, I have found no evidence to support that E. trigintiduoguttata is one of them. However, a couple of natives that can mimic are: Chlorobalius leucoviridis, aka the spotted predatory katydid, an aggressive predator.... https://pubmed.ncbi.nlm.nih.gov/19142230... and Pseudorhynchus mimeticus, aka mimicking snout-nosed katydid, although I've found no information regarding its feeding habits.... https://australian.museum/learn/animals/...

Thanks, Mark. The Brisbane Insects site is very comprehensive and has some good photos, so that helped a lot when trying to ID this spotting. Without it, I'd still be going!

Great to get to species on one of these.
Nice job.

Me! It was me, Sergio! I counted the dots... several times! I was testing their 32 dot claim, but it was for science. The fact that I had the time to do so was mere coincidence ;-)

I wonder who took the time to count all those spots. Some people have a lot of free time...

Thanks, Brian. He was a cute little fellow. Good jumper too!