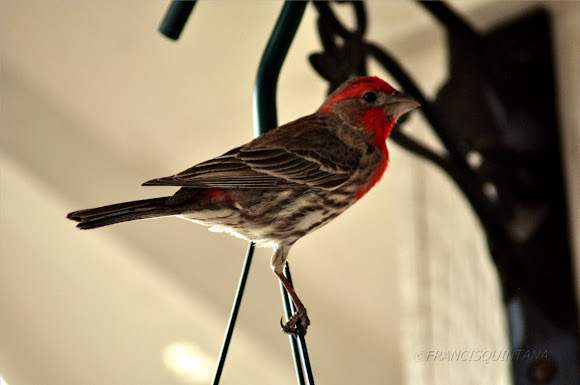 The House Finch is a recent introduction from western into eastern North America (and Hawaii), but it has received a warmer reception than other arrivals like the European Starling and House Sparrow. That’s partly due to the cheerful red head and breast of males, and to the bird’s long, twittering song, which can now be heard in most of the neighborhoods of the continent. If you haven’t seen one recently, chances are you can find one at the next bird feeder you come across.

The House Finch was originally a bird of the western United States and Mexico. In 1940 a small number of finches were turned loose on Long Island, New York, after failed attempts to sell them as cage birds (“Hollywood finches”). They quickly started breeding and spread across almost all of the eastern United States and southern Canada within the next 50 years. The total House Finch population across North America is staggering. Scientists estimate between 267 million and 1.4 billion individuals. House Finches were introduced to Oahu from San Francisco sometime before 1870. They had become abundant on all the major Hawaiian Islands by 1901. The red of a male House Finch comes from pigments contained in its food during molt (birds can’t make bright red or yellow colors directly). So the more pigment in the food, the redder the male. This is why people sometimes see orange or yellowish male House Finches. Females prefer to mate with the reddest male they can find, perhaps raising the chances they get a capable mate who can do his part in feeding the nestlings.

Thank you for the comment VarunRao, I spotted this pair guarding their nest on my front porch.