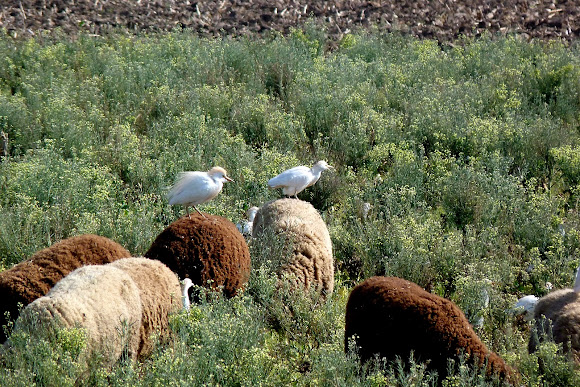 The cattle egret is a stocky heron, with a relatively short thick neck, a sturdy bill, and a hunched posture. Its plumage is white, having an orange/yellow beak and grey/orange legs. During the breeding season, adults of the nominate western subspecies develop orange-buff plumes on the back, breast and crown, and the bill, legs and irises become bright red for a brief period prior to pairing. This species gives a quiet, throaty rick-rack call at the breeding colony, but is otherwise largely silent. It has a strong relationship with humans and their domesticated animals.

Although the cattle egret sometimes feeds in shallow water, unlike most herons it is typically found in fields and dry grassy habitats, reflecting its greater dietary reliance on terrestrial insects rather than aquatic prey.

The shepherd was slightly bothered with my camera, so I took some quick pictures when he wasn't looking from the other side of the small river. Can anyone ID the sheep? Perhaps I should create a spotting just for them.