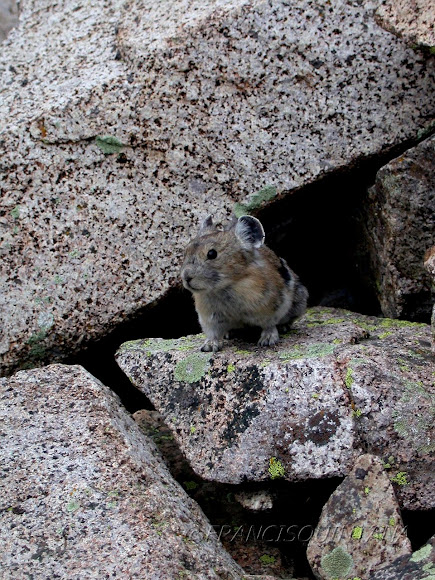 A small mammal, with short limbs, rounded ears, and no external tail. The name pika is used for any member of the Ochotonidae, a family within the order of lagomorphs, which also includes the Leporidae (rabbits and hares). One genus, Ochotona, is recognised within the family, and it includes 30 species. It is also known as the "whistling hare" due to its high-pitched alarm call when diving into its burrow. The name "pika" appears to be derived from the Tungus piika.

Pikas are native to cold climates, mostly in Asia, North America and parts of eastern Europe. Most species live on rocky mountain sides, where there are numerous crevices to shelter in, although some also construct crude burrows. A few burrowing species are instead native to open steppe land. In the mountains of Eurasia, pikas often share their burrows with snowfinches, which build their nests there.

Pikas are diurnal or crepuscular, with higher elevation species generally being more active during the daytime. They show their peak activity just before the winter season. Pikas do not hibernate, so they generally spend time during the summer collecting and storing food they will eat over the winter. Each rock-dwelling pika stores its own "haypile" of dried vegetation, while burrowing species often share food stores with their burrow mates. Haying behavior is more prominent at higher elevations. Many of the vocalizations and social behaviors that pikas exhibit are related to haypile defense. Eurasian pikas commonly live in family groups and share duties of gathering food and keeping watch. At least some species are territorial. North American pikas (O. princeps and O. collaris) are asocial, leading solitary lives outside the breeding season.