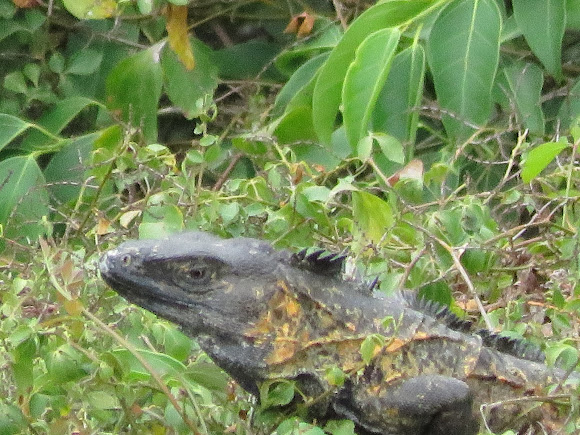 Commonly known as the black spiny-tailed iguana, black iguana, or black ctenosaur, is a lizard native to Mexico and Central America that has been introduced to the United States in the state of Florida. Black spiny-tailed iguanas are excellent climbers, and prefer a rocky habitat with plenty of crevices to hide in, rocks to bask on, and nearby trees to climb.[3] They are diurnal and fast moving, employing their speed to escape predators but will lash with their tails and bite if cornered.[3] The Guinness Book of World Records lists the running speed of this species at 21.7 mph or 34.9 km/h making it the world's fastest lizard

The black spiny-tailed iguana is native to Central America, and has the widest range of all Ctenosaura species from the Isthmus of Tehuantepec to northeastern Nicaragua and western Panama on the respective Atlantic and Pacific coasts.[4][3] It is commonly found throughout Costa Rica, Honduras and has been reported in Colombia. In addition to its varied appearance it may interbreed with other Ctenosaur species throughout this range.

Yaniv and Sarit Wainer 6 years ago

Great photos! It would be great if you added your spotting to the "Reptiles of Costa Rica" mission:
http://www.projectnoah.org/missions/1589...