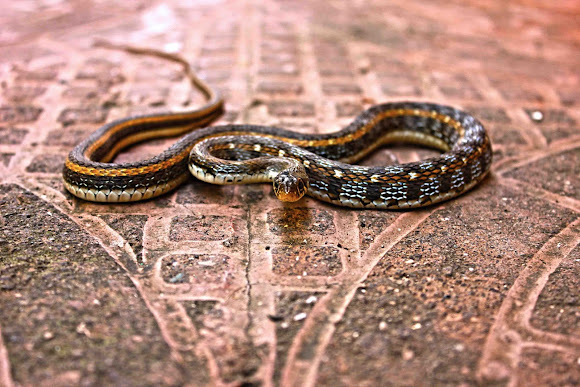 A small, slender snake, the buff striped keelback is generally olive-brown to gray in colour. The head and the body are of the same colour. The body of the buff striped keelback is short, and it has a long slender tail which is almost a quarter of its length. Two yellow stripes along the length and to the sides of the spine are the distinctive feature of this snake. These stripes are diffuse at the head and are especially bright on the second half of its body. The keelback has irregular blackish crossbars on the body. Near the head the crossbars are prominent, whereas on the second half of the snake they become diffuse. The sides of the head are yellow, and the head tapers to form a distinctive neck. The nape is red during the breeding season. The chin and throats are white or sometimes orange. There are black vertical markings in front of and behind the large eyes. The eyes have large round pupils with golden flecks on the iris. The forked tongue is black. The underside is pale cream and has small black spots scattered along both the margins. It has keeled scales on the dorsal surface of the body..