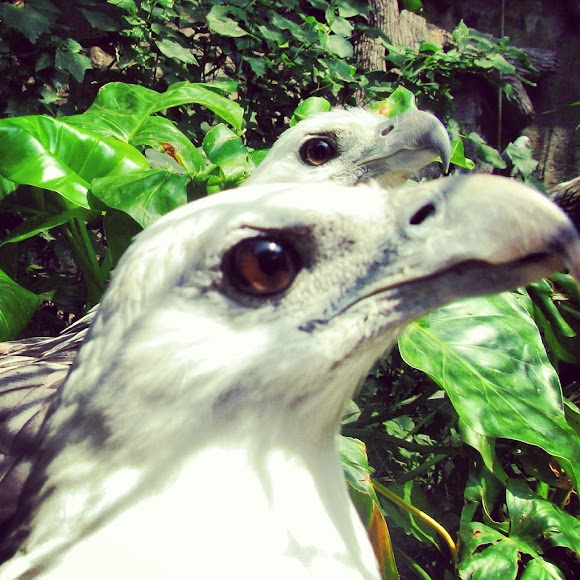 The White-bellied Sea Eagle (Haliaeetus leucogaster), also known as the White-breasted Sea Eagle, is a large diurnal bird of prey in the family Accipitridae. Originally described by Johann Friedrich Gmelin in 1788, it is closely related to Sanford's Sea Eagle of the Solomon Islands, and the two are considered a superspecies. A distinctive bird, the adult White-bellied Sea Eagle has a white head, breast, under-wing coverts and tail. The upper parts are grey and the black under-wing flight feathers contrast with the white coverts. The tail is short and wedge-shaped as in all Haliaeetus species. Like many raptors, the female is slightly larger than the male, and can measure up to 90 cm (36 in) long with a wingspan of up to 2.2 m (7 ft), and weigh 4.5 kg (10 lb). Immature birds have brown plumage, which is gradually replaced by white until the age of five or six years. The call is a loud goose-like honking. Resident from India and Sri Lanka through southeast Asia to Australia on coasts and major waterways, the White-bellied Sea Eagle breeds and hunts near water, and fish form around half of its diet. Opportunistic, it consumes carrion and a wide variety of animals. Although rated of Least Concern globally, it has declined in parts of southeast Asia such as Thailand, and southeastern Australia. It is ranked as Threatened in Victoria and Vulnerable in South Australia and Tasmania. Human disturbance to its habitat is the main threat, both from direct human activity near nests which impacts on breeding success, and from removal of suitable trees for nesting. The White-bellied Sea Eagle is revered by indigenous people in many parts of Australia, and is the subject of various folk tales throughout its range. Source: Wikipedia

The White-bellied Sea Eagle is found from regularly from Mumbai (sometimes north to Gujarat, and in the past in the Lakshadweep Islands) eastwards in India, Bangladesh, and Sri Lanka in southern Asia, through all of coastal Southeast Asia including Burma, Thailand, Malaysia, Indonesia, Indochina, the main and offshore islands of the Philippines, and southern China including Hong Kong, Hainan and Fuzhou, eastwards through New Guinea and the Bismarck Archipelago, and Australia. In the northern Solomons it is restricted to Nissan Island, and replaced elsewhere by Sanford's Sea Eagle. In Victoria, where it is otherwise scarce, it is locally more common at Corner Inlet and Gippsland Lakes. Similarly in South Australia, it is most abundant along the north coast of Kangaroo Island. The range extends to the islands of Bass Strait and Tasmania, and it is thought able to move between the islands and the mainland. There is one unconfirmed record from Lord Howe Island and several from New Zealand. They are a common sight in coastal areas, but may also be seen well inland. The White-bellied Sea Eagle is generally sedentary and territorial, although it may travel long distances. They have been reported travelling upriver to hunt for flying foxes (Pteropus). Populations in inland Australia move around as inland bodies of water appear and then dry up. In one instance, a pair came to breed at Lake Albacutya in northwestern Victoria after the lake had been empty for 30 years. The species is easily disturbed by humans, especially when nesting, and may desert nesting sites as a result. It is found in greater numbers in areas with little or no human impact or interference.