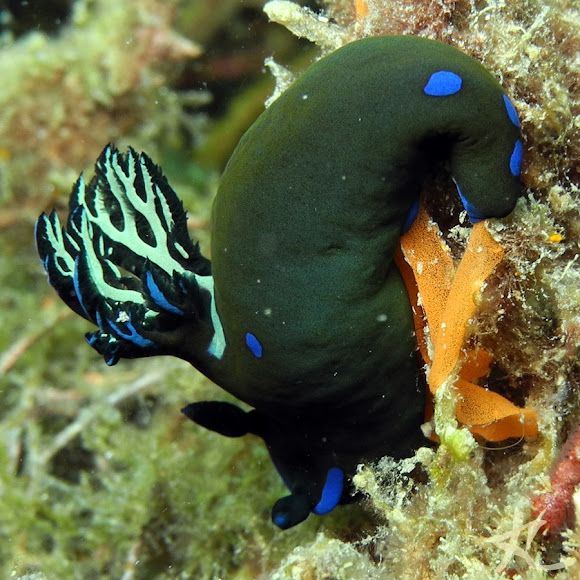 This large species, also known as Gloomy Tambja, grows to a length of about 70-75mm, and feeds on arborescent bryozoan colonies. Although dark green specimens are found in cooler waters (eg., New South Wales and northern New Zealand), T. morosa is normally black with bright blue markings. The skin of this slug is wrinkled, and appears nearly black underwater. It has approximately five round, blue spots on its back, a blue band around its head, and a bright blue margin on its mantle. Its egg spiral is salmon pink or orange in color.

Coral and rocky reefs, on sand and rubble areas, in the waters of the Indo-Pacific.

Spotted this egg-laying nudibranch at an unnamed dive site, a shoal in front of the Babak pier, Samal Island. It was in about 7m of water.

Seen the video, under what depth is that?

Just updated this spotting with a video. :)

Another Master piece from the Abyss Master!

Thank you, Blogie! It's beautiful!

Black is my favorite colour so love to watch it in every Organism... Great combination with Blue and Aqua colours...

Gloomy! How appropriate with that body colour.. yet another incredible spotting Blogie.