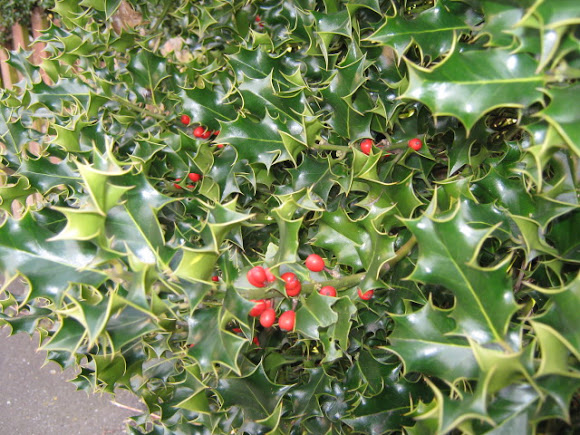 "Ilex aquifolium (holly, common holly, English holly, European holly, or occasionally Christmas holly), is a species of holly native to western and southern Europe, northwest Africa, and southwest Asia. I. aquifolium is the species familiar in Christmas decoration, and is regarded as the type species of the genus Ilex, which by association is also called "holly". It is a dioecious tree or shrub found, for example, in shady areas of forests of oak and in beech hedges. It has a great capacity to adapt to different conditions and is a pioneer species that repopulates the margins of forests or clearcuts." "As a tree, it can exceed 10 m in height. It is usually found as a shrub or a small tree about 1 m tall with a straight trunk and pyramidal crown, which branches from the base. It is slow growing and it does not usually fully mature due to grazing, cutting, or fire. It can live 500 years, but usually does not reach 100."Reference-http://en.wikipedia.org/wiki/Ilex_aquifolium