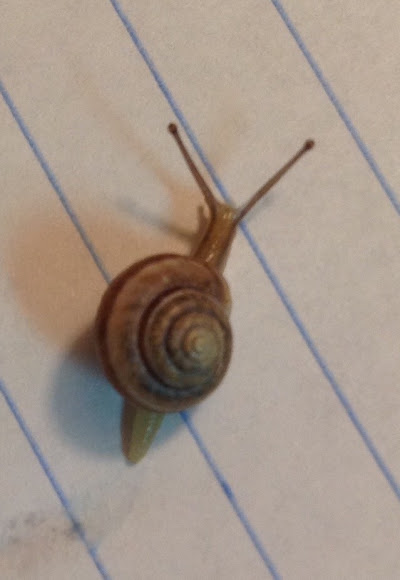 Mollusks are a very diverse group, with at least 85,000 species named, and up to 200,000 species occurring worldwide. The best known classes of Mollusks, are the Gastropoda ( snails and slugs ), Bivalvia ( clams, oysters, mussels, and scallops ), and Cephalopoda ( squids, cuttlefishes, octopuses, and nautiluses). Among the most interesting of the Mollusks, are the snails. They occur in both aquatic ( marine and fresh-water ) and terrestrial environments. Other snails are amphibious, moving freely between wet and dry habitats. A number of terrestrial snails occur in Florida, some native and some non-native. Snails are best known for there shells, which can appear in various forms, but normally is coiled ( helical ) . The shell is secreted by a part of the body, called the mantle, and the shell consists primarily of calcium carbonate. The shape of the snail, changes with maturity. The snails body, contains all the physiological systems, normally associated with higher animals, allowing ingestion, digestion, reproduction, locomotion, etc. Among the most noticeable features, are the tentacles and the foot. There are two pairs of tentacles in the head region, with the larger pair located dorsally, and possessing eyes at there tips. The tentacles are also used for tasting and smelling. The foot is a muscle, and is located ventrally. The foot provides waves of muscular contractions, that allow locomotion. The skin is responsible for water regulation, and contains glands that secrete slime, which aids both in preventing dehydration and in locomotion. Snails also have a breathing pore ( pneumostome), which they can open and close, and which leads into the lung, for gas exchange. Contained within the mouth is a radula, a tooth-covered rasp, that can be used to scrape and cut food. Snails are important in the conversion of plant matter ( algae, fungi, or plant detritus ), into animal matter. In the wild, snails eat a variety of different foods. Terrestrial snails are usually herbivorous. The diet of most land snails, can include: leaves, stems, soft bark, fruit, vegetables, fungi, and algae. Slugs and snails are in a subgroup, called Gastropoda, the members of which have a head, a ventral muscular foot, and a shell ( internal in slugs, and external on snails ). Approximately, 725 species of land snails, and about 40 species of slugs, are known from North America. Slugs and snails, are usually nocturnal. Slugs and snails, leave silvery slime trails on the ground, and over plants. Snails without a shell, are called slugs..

Land snails, like to live in locations, where there are humans. They don't like to be where it is too hot, but they often are found in shaded areas. You should look for snails, when it is cloudy, or in the night time. Some types of land snails live underground, so you will only see them when it's raining. They don't like extreme heat, so they will find places where they can be cool..

At 8:00 a.m. in the morning, I went outside, to see if I could find any insects. I saw a small snail, resting on a wall, near the front door. It was about, one fourth of an inch wide. The colors of the shell, was different shades of brown and green, and also some black. It had two dark lines, running down the neck of the snail. This was a land snail..

I have these all over my house each morning! ( Ocala Florida)