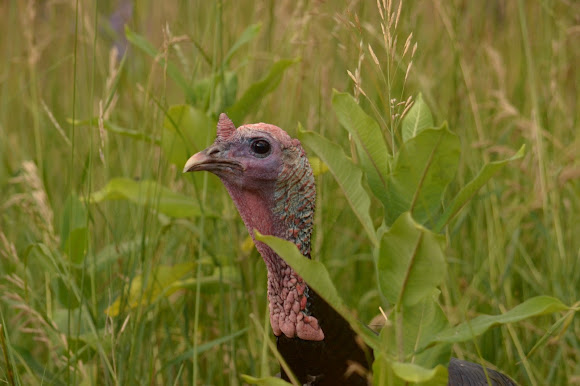 In an area of mowed and unmowed native prairie grasses, close to woods and fresh water (creek and lake)

I used to fill the bird feeders at the park so many of the wild turkey came to know me by sight and/or voice and associated me with food, I believe. If I came walking out of the woods on a trail they'd start running away until they heard my voice at which point they'd stop running, turn around and slowly start heading back towards me. The younger turkey and females would occasionally make a sound that sounded like cooing when they saw me. I can only guess that was a sound of anticipation, contentment or perhaps happiness...? The more time I spent around the turkey, the more I thought how similar they were to farm raised fowl (turkey or chickens) the only difference being that a male (rooster or in this case Tom) never tried to attack me so perhaps they're less territorial than caged or "housed" birds...?