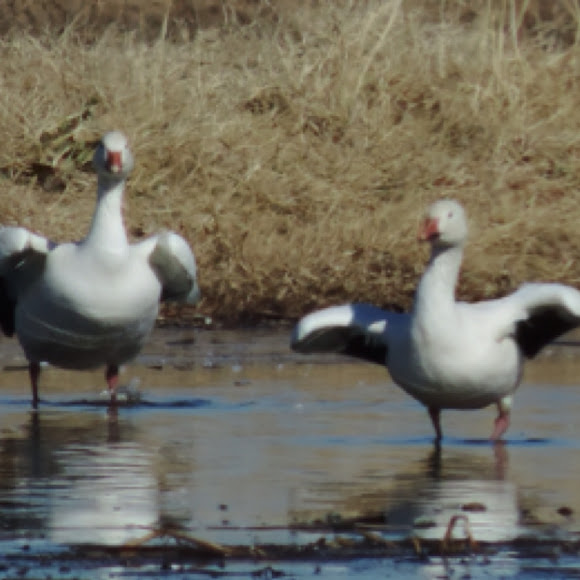 25-31" (64-79 cm). Smaller than the domestic goose. Pure white with black wing tips; bill pink with black "lips"; legs pink. Young birds have dark bill and are mottled with brownish gray above. A dark phase, once considered a separate species called the "Blue Goose," has bluish-gray upperparts, brownish underparts, and white head and neck. Blue-phase birds have spread westward in recent decades and are now found locally throughout their winter range among the thousands of white Snow Geese.

Hagerman National Wildlife Refuge (HNWR), a haven for migratory birds and other wildlife, lies in northwestern Grayson County, Texas. It was established in 1946 as an overlay of a portion of the Big Mineral arm of Lake Texoma in north-central Texas. Consisting of about 12,000 acres, the refuge provides a variety of habitats for birds and wildlife. It is made up of water, marsh, and upland habitat. The main focus at HNWR is providing a winter home for thousands of waterfowl. Canada, snow, white-fronted, and Ross' geese along with pintail, mallard, gadwall and other ducks use refuge impoundments and fields as stop-over and wintering grounds. At times, as many as 10,000 geese can be seen in one field. Ducks such as mallards, northern shovelers, green-winged teal, and northern pintail are commonly seen on refuge waters during fall and winter months.

It was cold and most of the shallow pond where the geese had congregated was frozen, except for a narrow strip along the edge.