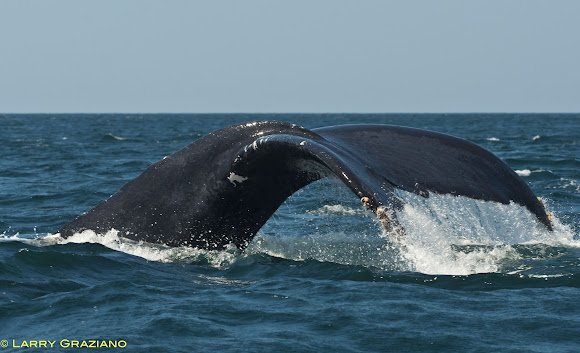 From Wikipedia: One of the larger rorqual species, adults range in length from 12–16 metres (39–52 ft) and weigh approximately 36,000 kilograms (79,000 lb). The humpback has a distinctive body shape, with unusually long pectoral fins and a knobbly head. An acrobatic animal known for breaching and slapping the water with its tail and pectorals, it is popular with whale watchers off Australia, New Zealand, South America, Canada, and the United States. Males produce a complex song lasting 10 to 20 minutes, which they repeat for hours at a time

From Wikipedia: Humpbacks inhabit all major oceans, in a wide band running from the Antarctic ice edge to 77° N latitude. A 2007 study identified seven individuals wintering off the Pacific coast of Costa Rica as having traveled from the Antarctic—around 8,300 kilometres (5,200 mi). Identified by their unique tail patterns, these animals made the longest documented mammalian migration.

Cool! The humpbacks are the most prolific whales in our coastal waters here in Costa Rica. We have the privilege of receiving a migration from the north and south. This enables us to see them most of the year.

Beautiful and close! They're migrating up Australia's east coast early this season, some already spotted this week and a few weeks ago.

Fun fact! Humpback whales eat up to a ton of fish, krill and plankton a day, and newborn calves consume over 50 gallons of their mother's milk daily! Humpbacks mainly feed in the summer months, living mostly off fat reserves during winter. https://www.facebook.com/projectnoah/pho...

Thank you Luis, Gilma and RawrWildie.

Thanks for sharing!!! I love the vid!😊

Fantastic!! So beautiful!! Thank you for sharing, LarryGraziano.