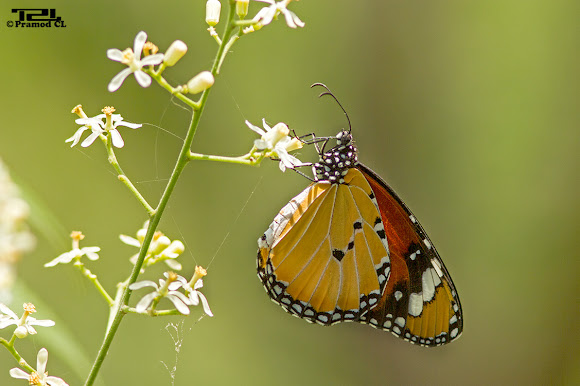 The Danaus chrysippus is a medium-sized butterfly with a wingspan of about 7–8 centimetres (2.8–3.1 in). The body is black with many white spots. The wings are tawny, the upper side brighter and richer than the underside. The apical half of the forewing is black with a white band. The hindwing has three black spots around the center. The hindwing has a thin border of black enclosing a series of semicircular white spots. Background color and extent of white on the forewings varies somewhat across the wide range; see Systematics and taxonomy below. The male plain tiger is smaller than the female, but more brightly colored. In addition, male danaines have a number of secondary sexual characteristics

The range of the plain tiger extends from Africa and southern Europe, eastwards via Sri Lanka, India, and Myanmar to China, Java and Sulawesi. It is a very common species