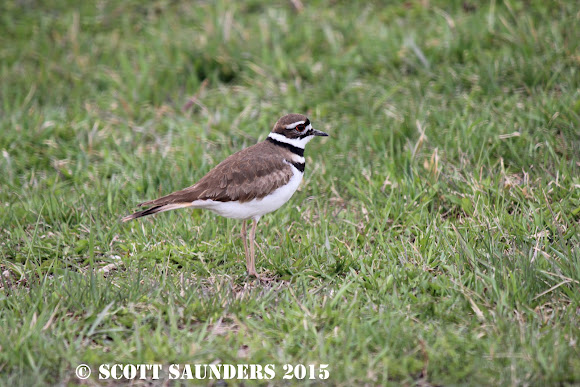 Adult killdeer range in length from 23 – 27 cm (9.06 – 10.63 in) with a wingspan averaging 17.5 cm (6.89 in). The largest ringed plover, killdeer weigh 88 g (3.10 oz) on average.[3][4] Killdeer have a characteristic large, round head, long tail, long flesh-colored legs, and long wings. The bill is short, dark, and thick. Plumage is brownish-tan on dorsal areas and white on the ventral belly and chest; the neck is also surrounded by a white collar. Two large, dark bands surround the upper breast with an additional band located on the head, spanning both the forehead and the area above the bill and continuing around the back of the head. The tail is brown with a black subterminal band, a white terminal band, and white outer tail feathers. Additional defining plumage characters include a brightly colored red-orange rump that is visible during flight and displays, white wing stripes visible during flight. Appearance does not vary between males and females, although breeding females may have additional brown plumage on the head. Juveniles resemble adults with the exception of buff fringe feathers and the presence of only one neck band

During nesting season killdeer use open dry uplands, open areas where vegetation is short or absent, agricultural field, and meadows.[7] In addition, Hayman et al.[8] document killdeer use of open wetland habitat and savannahs, selecting dry bare ground and dry ground with vegetation within wetland areas. Nesting habitat is characterized as having enough nest materials to form a scrape but otherwise having little or no vegetation;[9] Killdeer have also been recorded using gravel roofs as nesting habitat.[10] During the non-breeding season killdeer use coastal wetland and beach habitat as well as coastal fields.[7] Ogden et al.[11] suggest that coastal open-soil agricultural lands supplement intertidal habitat frequently used by killdeer during the non-breeding season. Because fertilizer application as well as the prevention of habitat fragmentation benefits killdeer as well as a host of other migratory shorebirds, maintaining a mosaic of habitat in coastal farmland areas is optimal for maintaining killdeer populations.