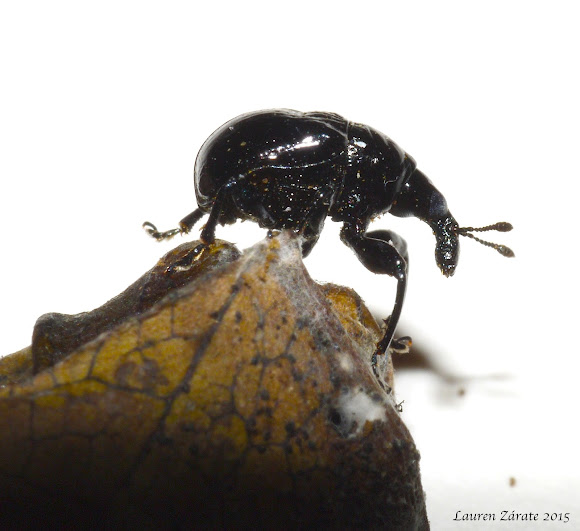 While visiting the Edward James Surrealism Park near Xilitla (part of the Selva Huasteca) on 17 April 2015, we collected several weevil leaf rolls from the ground among the leaf litter. It was not possible to ascertain from which of several trees overhead they had fallen from. The last picture shows the leaf rolls as they looked when found. They are 9-10 mm long. On 28 April 2015, the first weevil emerged. Shiny black, 4 mm in length, hairless and with straight antennae. Family Attelabidae. It emerged from a hole more or less the size of its own body, cut through from the inside. Looking close, you can see the hundreds of little bite marks around the edge of the hole. The front tibiae are bowed and toothed to aid in the formation of the leaf rolls. These rolls hold a single egg (sometimes more) placed into the roll at around the second fold. Some species put the egg in through the end and others cut a center hole and deposit the egg into the roll through the hole. They then continue to roll the leaf. Sometimes the roll is cut and released to the ground and sometimes it is left on the tree. Whether it is dropped or left on seems to depend on the time of the year. The rolled leaf provides a safe shelter and food for the larvae. A single female can make as many as 30 leaf rolls in her lifetime. Males often accompany the female during the construction of the leaf roll (sometimes even riding on the female's back while she works) and might be on the watch against parasitoids. A second weevil emerged from the same leaf roll as the first weevil on 1 May 2015. The second hole was on the end of the roll. This one may be the male, since the front tibiae were not toothed and were less bowed.

Emerged from tightly rolled leaf capsules found among the leaf litter of the forest.

The video shows a Time-Lapse recreation of the leaf roll by a Japanese species similar to this one. The video was not taken by me, but it is so important to see the method this tiny weevil uses to create these little rolls. This is the data for the video and the information that accompanies it: "Published on Jul 30, 2012, Female of the six-spotted leaf-rolling weevil (Apoderus (Leptapoderus) praecellens, family Attelabidae) making a leaf-roll from one of the favourite host-plants, Rabdosia trichocarpa (family Lamiaceae). Let's roll! She deposited an egg inside the leaf-roll which would be a packed food as well as a safe shelter for the larva. She is a natural-born origami master! Early-June 2012 in Japan. This timelapse movie was reconstructed from the 5-sec-interval shots on two females. (12:58 pm - 13:57 pm for female-#1. 14:31 pm - 16:45 pm and 16:59 pm - 17:25 pm for female-#2.)  日本語による詳細はブログをご覧ください。 ‪http://sigma-nature-vlog.blogspot.jp/...‬ ムツモンオトシブミ♀揺籃作り(微速度撮影映像)". (https://www.youtube.com/watch?v=o9R7hNJb...). See also this BBC video of the Madagascaran Giraffe Weevil constructing it's leaf roll (https://www.youtube.com/watch?v=CN-WjdA6...). Also: https://www.youtube.com/watch?v=x5641C8y.... These 2 references are very interesting: http://www.zin.ru/animalia/coleoptera/pd... and https://edis.ifas.ufl.edu/pdffiles/IN/IN.... The second article talks about a "Thief Weevil" species which will wait nearby until a leaf roll is completed, then enter through the folds of the leaf and eat the egg of the original weevil. It then lays one or more of its own eggs into the leaf roll.

That's a fantastic spotting Lauren. Thanks so much for the information and the video. The egg cases are like greek Dolmades !

Superb spotting Lauren. Love these little muscle guys. Love the idea of a 'Thief Weevil' too.. what a lazy annoying thing.