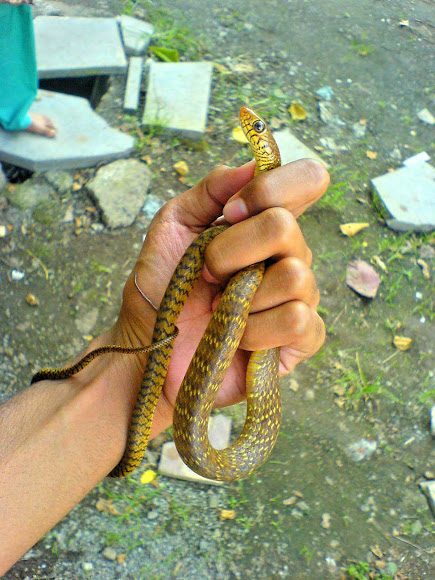 Eye large; rostral a little broader than deep, visible from above; Suture between the inter-nasals shorter than that between the prefrontals ; Frontal as long as its distance from the end of the snout, as long as the parietals or slightly shorter; usually three Loreals; one large Preocular, with a small Subocular below; two Postoculars: Temporals 2+2; 8 Upper labials, fourth and fifth entering the eye; 5 Lower labials in contact with the anterior chin-shields, which are shorter than the posterior; the latter in contact anteriorly. Scales more or less strongly keeled on the posterior part of the back, in 17 rows. Ventrals 190-208; Anal divided; Subcaudals 95-135. brown above, frequently with more or less distinct black cross-bands on the posterior part of the body and on the tail; Young usually with light Cross-bands on the front half of the body. Lower surface yellowish; the posterior ventral and the caudal Shields may be edged with black.

When threatened they are capable of growling. This has been suggested as a possible case of mimicry of the King Cobra. However, this mimicry often proves to be a disadvantage if the snake lives with humans; more often than not, this snake is mistaken for the King Cobra or a related animal such as the Indian Cobra, and frequently killed because of this.

Hello SomnathKumbhar. A spotting can accommodate 6 full-size images so you might consider that approach rather than building composites where each part is smaller than full-size. Cheers